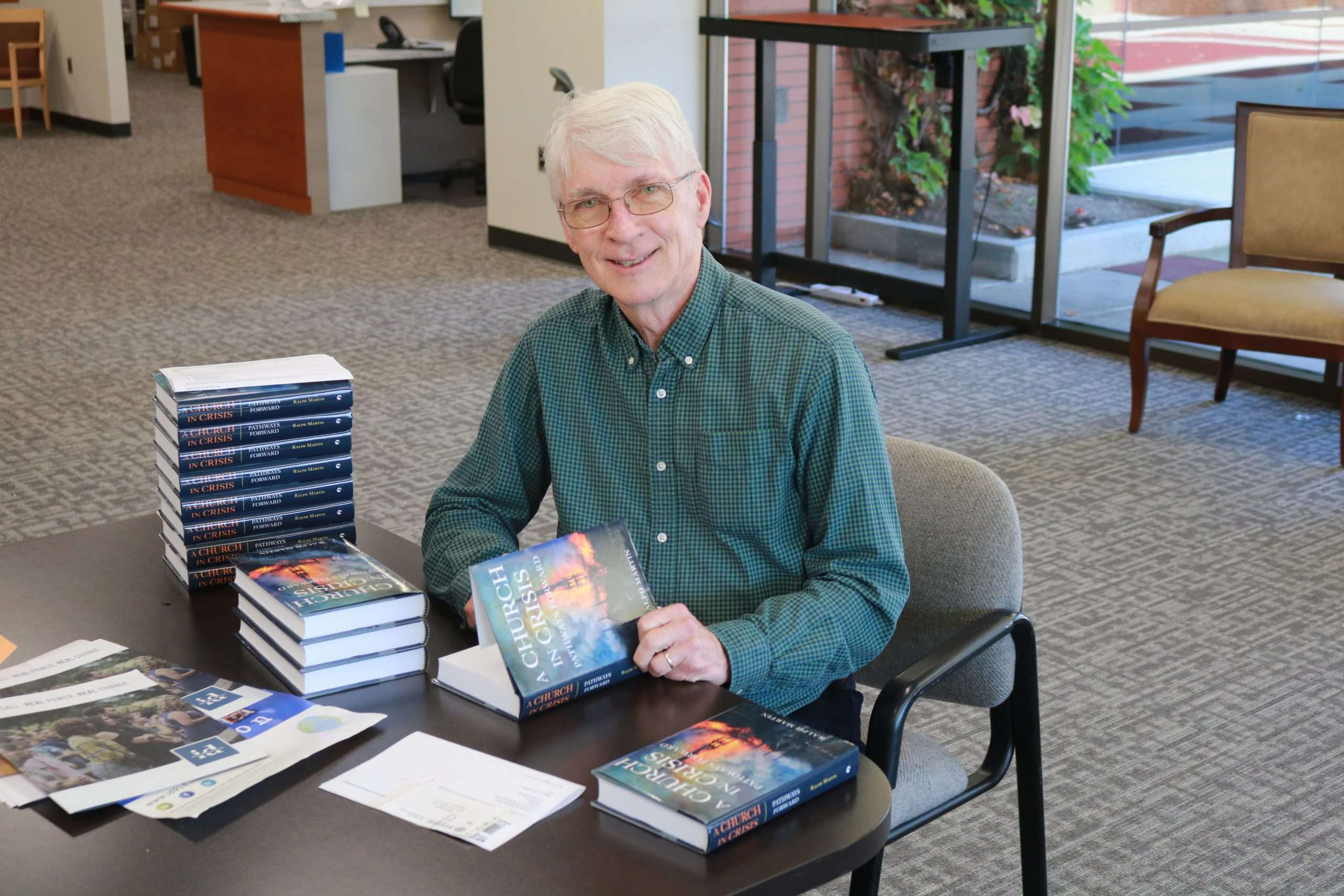 And we know it will only be happy in the truest sense to the degree that we are in union with God’s will for us. May it be so!

As we begin this new year, I want to draw our attention to three clear “blasts of the trumpet” that contain warnings that need to be heeded.

The first warning came from Pope Emeritus Benedict XVI and was given to us after he retired. I quoted his warning on page 253 of my book, A Church in Crisis.

“One hundred years ago, everybody would have considered it to be absurd to speak of a homosexual marriage. Today, one is being excommunicated by society if one opposes it. [The same applied to] abortion and to the creation of human beings in the laboratory.

Modern society is in the middle of formulating an anti-Christian creed, and if one opposes it, one is being punished by society with ex-communication. The fear of this spiritual power of the Anti-Christ is then only more than natural, and it really needs the help of prayers on the part of an entire diocese and of the Universal Church in order to resist it.”

The second warning is sounded by, of all people, President Vladimir Putin, President of Russia in remarks made during a plenary session of the 18th annual meeting of the Valdai International Discussion Club in Sochi where the topic was “Global Shake-up in the 21st Century.” His remarks were translated into English and are now posted on the Daily Wire website.

When I read Putin’s remarks, I could hardly believe what I was reading. Putin was basically saying that Western Culture was embarking on the same disastrous path that Russia had embarked on when it turned to atheistic communism and the dogmas of Marx and Engels in the Bolshevik Revolution of 1917. He called the West’s repudiation of Judeo-Christian tradition a foolish choice that would only lead to immense suffering. He specifically mentioned the loss of respect for male and female identity, traditional marriage, and sexual morality as foolish and bound to cause endless suffering. He called the attack on gender identity and the indoctrination of small children into this deception almost worthy of being called a “crime against humanity.” He said that the new “diversity” rules were departures from reality and warned that, eventually, reality would have its way. He continued to say that man’s attempt to build a new society by means of brute force, intimidation, and totalitarian control would collapse and cause immense suffering. Whoa!

One can question many things about Putin and his own personal and governmental morality, but what he is saying here is true. A strange, new form of Marxism has gained control of the levers of power in Western Culture. It is imposing on Western Culture a new “religion” and an ideology of “wokeness.” It is pitting races against each other, dividing the world into the oppressed and the oppressor, and insisting that all bow down to it. This is the same technique of class warfare that Marxism used to try to establish the “dictatorship of the proletariat,” which promised to put all political power in the hands of working-class citizens. The movement never emerged beyond dictatorship, much less resulted in the communist “paradise” it promised. Instead, it turned Russia into hell on earth with the elimination and imprisonment of millions of citizens who resisted the dictatorship.

When I read this speech from the Russian President, I felt a shock similar to the one I felt when I rediscovered Fr. Michael Scanlan’s prophecy from 1976. Both seemed remarkably applicable to our situation today, and so, as I did with Fr. Scanlan’s prophecy, I taped a YouTube video commenting in some detail on Putin’s warning. It is titled Ralph Martin – A Startling Warning from a Surprising Source and can be watched on Renewal Ministries’ YouTube channel at this web address: https://www.youtube.com/watch?v=Box0rNodYU0.

To date, my video on Putin’s warning has been viewed over 100,000 times. The video about Fr. Scanlan’s prophecy is still our most widely viewed YouTube video, however, having over 300,000 views. This one also has been translated into nine languages.

The third warning comes from Archbishop Joseph Gomez, archbishop of Los Angeles and the President of the United States Conference of Catholic Bishops (USCCB). Archbishop Gomez, whom I know personally, is a gentle, mild-mannered man in a politically sensitive position who doesn’t usually speak out as he did in a speech delivered by video to the Congress of Catholics and Public Life held in Madrid, Spain, on November 4, 2021.

Archbishop Gomez had signaled things to come after the election of President Biden, giving a wake-up call to recognize the massive incompatibility between the dominant pressures in our culture and our Christian faith. At that time, he warned that the new administration’s agenda was hostile to many of the fundamental teachings of the Catholic Church. He warned that the new administration would be doubling down on making abortion even more widely available and paid for with taxpayer money and elevating the LGBTQA+ agenda over the rights to conscience and religious freedom. He was strongly and publicly criticized for these statements by Cardinal Cupich, archbishop of Chicago, revealing a deep division among the American bishops. This division makes any meaningful, joint action on some of these issues very difficult.

In his video speech to the audience in Madrid, Archbishop Gomez addressed the new pressure for political correctness and the woke culture here in the United States. He gave a wake-up call to recognize the massive incompatibility between the dominant forces in our culture and our Christian faith.

“An elite leadership class has risen in our countries that has little interest in religion and no real attachments to the nations they live in or to local traditions or cultures… This group, which is in charge in corporations, governments, universities, the media, and in the cultural and professional establishments, wants to establish what we might call a global civilization… In fact, as they see it, religion, especially Christianity, only gets in the way of the society they hope to build.”

While acknowledging the importance of Catholic social teaching and the need to continue to correct injustices, whether racial or economic, Archbishop Gomez warned that these movements have now become elevated into virtual religions, attempting to build a perfect society without God or realism about human nature. As a result, he said, “these strictly secular movements are causing new forms of social division, discrimination, intolerance, and injustice.” He said these movements “seem to be coming from the same Marxist cultural vision,” calling them “dangerous substitutes for true religion.”

Archbishop Gomez warned that space in our societies for believing Christians, Church institutions, and Christian-owned businesses is shrinking. The cultures being “canceled” by the elite leadership class of the United States and Europe are those that originated with Christian beliefs.

Resolving to respond with faith, prayer, and hope

And his advice about how we should respond?

“My answer is simple,” Archbishop Gomez said. “We need to proclaim Jesus Christ. Boldly, creatively… With charity and confidence, without fear… We should not be intimidated by these new religions of social justice and political identity. The Gospel remains the most powerful force for social change that the world has ever seen… Of course, in the Church we have not always lived up to our beautiful principles, or carried out the mission entrusted to us by Christ. But the world does not need a new secular religion to replace Christianity. It needs you and me to be better witnesses. Better Christians. Let us being by forgiving, loving, sacrificing for others, putting away spiritual poisons like resentment and envy.”

I’ve recorded a video on Archbishop Gomez’s insightful speech titled Ralph Martin – Archbishop Gomez Hits a Home Run; Who is Next Up to Bat? You can watch it on Renewal Ministries’ YouTube Channel at https://www.youtube.com/watch?v=B9J-bHH0PZw&t=1s

Let us all heed these warnings and their implied and explicit solutions. In this new year, let’s resolve to live our faith more deeply. Let’s re-dedicate ourselves to prayer, a deeper relationship with the person of Jesus, a deeper desire for the Holy Spirit, and a deeper reliance on the Father’s immense, personal love for each of us. Let us not be afraid but always be ready to give a reason for the great hope that we have within us (1 Peter 3:15), the hope of a life beyond death in the Father’s house – our hope in eternal life.

Want more insight and encouragement from the Renewal Ministries’ team on the current challenges facing our culture? Visit our YouTube channel: https://www.youtube.com/renewalministriesrm