In 1976, I had the privilege of being invited by Father Michael Scanlan to come to the now Franciscan University of Steubenville to help build, strengthen, and secure a living faith environment on campus. As part of that process, Father Michael invited Mother Teresa of Calcutta to be the commencement speaker at graduation in 1979. Father asked me if I would be willing to be her hostess for the day.Â It proved to be a life-changing day for me.

As I took Mother to and from the Pittsburgh Airport and accompanied her to various events, meals, etc., we hadÂ remarkable periods of time just to be together as we waited for events to begin.Â Over cups of tea we shared, I was struck by her humility, her other-centeredness, her love for the poor, and her total âgiven-nessâ to the ministry God had asked of her.

At one point, I asked her: âWhat is it like for you when you speak at banquets and other fundraising events and see our wealth and our waste?â She smiled and very softly answered, âSometimes when I see those huge platters of meat being passed down the tables, I think of âmy childrenâ scrambling under a table for a single grain of dropped rice.â She paused, and then waved her hand back and forth in front of her eyes and said, âBut Jesus has told us never to judge, so I do not judge.â

Later that day, her commencement address was based on the âoldâ Baltimore Catechism question, âWho made you and why did God make you?âÂ The answer is, âGod made us to know Him, to love Him, to serve Him in this world and to be happy with Him in the next.â Her whole speech was based on that question and that answer. It was a short commencement speech, but it was powerful in its impact. I know, for certain, of one studentâs life being totally turned around by her addressâand it was a conversion that lasted!

During one of the last conversations we had that day, as I prepared to take her to the airport, we shared this interchange:Â I said, âMother, I deeply admire you and the work you are doing. I feel that what I am doing is so small in comparison.â At that moment, she âgrabbedâ both of my upper arms and actually shook me for a moment, and then she said this: âSister, I am doing what you cannot do; you are doing what I cannot do.Â Together, we are the Body of Christ!âÂ The top of her head came just to my shoulders, but I will never forget the look in her eyes as she fixed her gaze on me.

Never, from that time, did I ever question what God was asking of me; never, since that time, have I ever wished, not even for a moment, to be doing something else. May God be praised, Who raises up living saints (sometimes with a capital âSâ)âpeople whose lives are so given to Christ, they become real channels of Godâs grace.Â May St. Teresa of Calcuttaâs witness inspire each of us to love Christ and to follow Him wherever He leads! 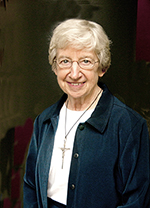