Below, Debbie Herbeck reflects on her meeting with Mother Teresa, whose canonization is Sept. 4, 2016.

Twenty-seven years ago, I was a young wife and mother, struggling in my vocation. I loved my husband, my two-year-old daughter, and my six-month old son, but the mundane and repetitive tasks of daily life, and the powerful messages of the womenâs movement, made my hidden and often thankless life as a mother seem insignificant and unimportant.

I was thrilled when Peter announced one day that we had been invited to give workshops at a large family conference in Bonn, Germany. It would be a short trip, with our nursing baby in tow, but it would give me a chance to express some of the gifts I had previously used in full-time youth ministry. Little did I know, this trip was not going to be about what I could do for God, but what He wanted to do for me.

From the moment our plane was airborne, everything seemed to go wrong. Michael cried for most of the flight, slept when everyone was awake, and was awake when we all needed to be asleep. I was exhausted, with a horrible migraine. Our luggage was broken into, with jewelry stolen, and baby food jars smashed. To top it all off, when we arrived, the conference organizers announced that they now only needed one of us to speak, and Peter was chosen. Amidst my fatigue and disappointment, I asked the Lord: âWhy did I come? Wouldnât it have been easier to just stay home?â

On the last day of the conference as we made our way to the large auditorium to hear the keynote speaker, one of the helpers stopped us. âExcuse me, but I noticed you have your baby with you. Mother Teresa would like all the mothers here with babies to sit on the stage with her as she speaks today.â Stunned, I followed her backstage and onto the stage with Michael, as Peter made his way to his balcony seat. A sea of white- and blue-clad Sisters escorted Mother Teresa down the center aisle and onto the stage.

I sat with fifteen other mothers and babies, just a few feet away from Mother. As she spoke about the dignity of the unborn child, you could have heard a pin drop. When the session ended, the same conference worker approached me: âMother Teresa would like to personally meet each mother and baby.â

Before long, I was standing in front of Mother Teresa. As I bent forward to greet her, she pressed a Marian medal into my hand and blessed Michael with the sign of the cross on his forehead. Then a most amazing thing happened. She pulled me closer and her urgency compelled me to look in her eyes.

âNever forget,â she said, gesturing with a crooked finger, âthat your job as a mother is the most important job in the entire world.â

Her words instantly pierced my heart, and I knew, without a doubt, that God had brought me to Germany to speak a word of truth that I was not able to receive at home in my kitchen. Over the years, her words and the subsequent reading I did about her life and calling, became the bedrock truth and inspiration for my vocation as a mother of four children, a grandmother, and a spiritual mother to many more. Saint Mother Teresa of Calcutta pray for us, and teach us what it means to be Godâs love to a world that so desperately needs it. 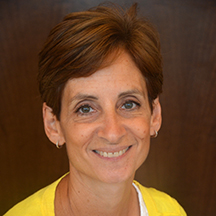 Debra Herbeck speaks at conferences and retreats about spiritual growth, discipleship, and her own journey from Judaism to the Catholic Church. For the past thirty years, she has worked extensively in youth and womenâs ministry. Debbie is the co-founder and leader of Be Love Revolution, a movement dedicated to helping young women encounter and be Godâs love in the world. Debbie is the director of Pine Hills Girls Camp. She also helps lead i.d.9:16, an outreach of Renewal Ministries that equips young adult Catholics to live as intentional disciples. She has written Safely Through the Storm: 120 Reflections on Hope, Firmly on the Rock: 120 Reflections on Faith, and Love Never Fails: 120 Reflections on Love. She and her husband Peter co-authored When the Spirit Speaks: Touched by Godâs Word. Debbie and Peter have four children and four grandchildren. They live in Ann Arbor, Michigan. Debbie can be contacted at dherbeck@renewalministries.net.

2 thoughts on “The Most Important Job in the World”