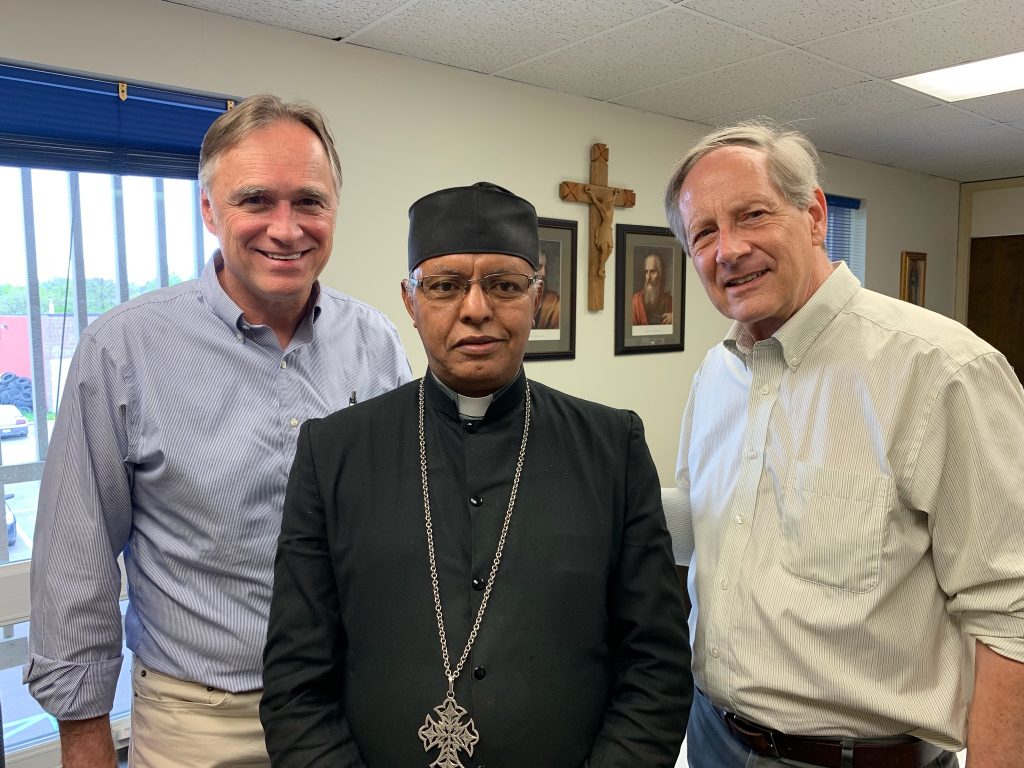 Bishop Lesanu-Christos Matheos, of the Eparchy of Bahir Dar-Dessir in Ethiopia, recently visited the Renewal Ministries’ offices. He was in the United States to attend the ordination of an Ethiopian priest in Chicago and to visit Ethiopian priests and communities.

Bishop Lesanu has seen amazing stories of conversion in his diocese over the past couple of years, especially in the Gumuz tribe. The Gumuz are very isolated, but two young men from the tribe who had encountered Jesus at school worked with the bishop to bring a priest to their people. Last year, 280 people were baptized!

And this year, Bishop Lesanu helped baptize 405 Gumuz people! He said the Gospel is bringing about tremendous change in the Gumuz culture. He said there are two things the Gumuz people value: not lying and not stealing. He said that even if a member of the Gumuz tribe were to kill someone, they would never lie about it.

He added, however, that the Gumuz also have a habit of killing people if they are annoyed with them. He said they don’t place much value on human life.

He explained that if a person’s family saw their loved one about to be killed, their typical response would be to simply kill the person themselves. By killing you before the enemy, he said, “they think they saved you.”

This “killing culture,” as Bishop Lesanu described it, has been reduced since the Gumuz have come to know Christ.

He shared a story about a mother who asked her sons to seek revenge on their father’s killer. All four sons refused, because “the Lord says not to kill.”

“This was a shock for the society,” said Bishop Lesanu.

Bishop Lesanu added that the Gumuz people are independent; they don’t want to beg. He once received $1 from a woman—“and, with the heart of the lady who gave it to me, that $1 is worth more to me than $1 million.”

“The Gumuz are unique because they are innocent,” he continued. “I tell them to keep that value and tradition. They give back if they are given any more than they need.”

The faithful receive additional teaching before receiving their First Communions.

He described the beauty of the Gumuz people’s faith: “They kiss the cross every time they come to the priest. They love the cross. They will run up to a priest of they see him on the street and say, ‘Bless me, Father’ and ask for absolution.”

Bishop Lesanu’s diocese is both new and very big—more than two-thirds the size of Italy. Yet he only has a very small number of priests and religious to assist him in serving the faithful.

He became acquainted with Renewal Ministries after doing an interview with Church in Need. At the time, he was a chaplain for the Charismatic Catholics, who “looked very Protestant.”

“This was a big load for me,” he explained. “I was given the big responsibility just to be an umbrella over them. I knew no one else. They published the interview, and many Catholics from around the world reached out to me. Michelle Moran, who at that time was president of ICCRS (International Catholic Charismatic Renewal Services), contacted me.”

Through that connection, Renewal Ministries’ Country Coordinators Lloyd and Nancy Greenhaw came to serve in Ethiopia. One way the Greenhaws have served is by teaching university students. “We have more than eleven big government universities in our area,” said Bishop Lesanu. “Each university has 40,000-50,000 students, with just one percent who are Catholic. We have to take care of them and give them good formation.”

Bishop Lesanu added, “In 2016, one year after my installation as bishop, I had a lot of problems directed to me. I questioned, ‘Is it really the will of God that I am a bishop?’ I had a car accident, there was division among my priests, and some of the faithful changed religions. It caused me to question myself. I was in contact with Ralph Martin and Sr. Ann Shields, and Sr. Ann told me to prostrate myself in front of the Eucharist very often. In one year, everything changed.”

Additionally, a priest who travelled with the Greenhaws last year saw the bishop’s living conditions—he had no office and worked out of his bedroom—and offered to pay the rent on a bigger house for a year. Now, the bishop has an office space and the Dominican Sisters of Catherine of Siena work there as well, doing pastoral education.

“I can see the Lord put me in that place and is following me, assisting me,” said Bishop Lesanu. “I can see that it is His will that this work be given to me.”