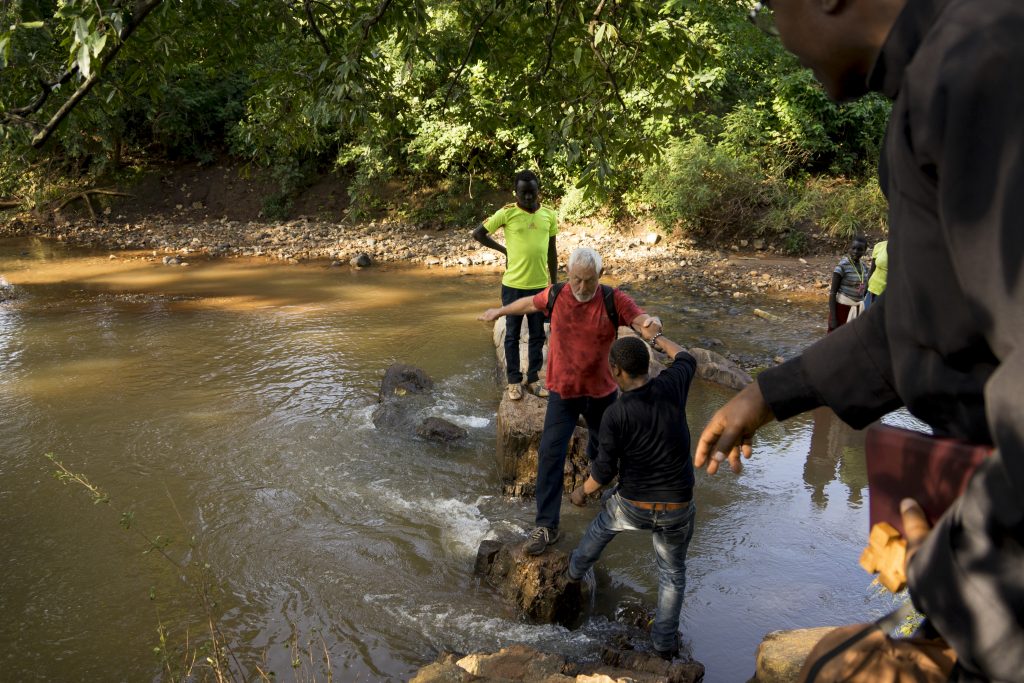 The team had to cross several streams, some by jumping rock to rock, in order to reach the Gumuz tribe.

During a recent mission to Ethiopia, we proclaimed the Gospel to unbaptized people just starting their journey to Christ. We felt like true missionaries!

At the request of Bishop Lesanu-Christos Matheos, we traveled several hours to a remote town called Banush, in the heart of Gumuz territory. The story of this Gumuz tribe is truly amazing! The Gumuz people are a very primitive and fierce tribe, with a reputation of violence and murder. In fact, other denominations have not attempted to evangelize them out of fear. About twelve years ago, a group of Comboni nuns went to the Gumuz in another area of Ethiopia and began a medical outreach to them. The love and care these wonderful nuns gave the people led them to Jesus and His Church, and now that region has a good number of Gumuz who are Catholics, but none of the Gumuz near Banush had yet been baptized.

However, two young Gumuz men, who had gone to school in Bahir Dar, encountered Jesus and were baptized. They then went to the bishop and asked him to send a priest to their village in the mountains. He told them that when they had at least forty people interested in the Catholic faith, he would send them a priest. These young men, filled with zeal for the Gospel, did just that—and the bishop, true to his word, sent his only diocesan priest, Fr. Teklemarian Amanuel, to them. After only a few months of preaching the Gospel there, 280 men, women, and children received the Sacrament of Baptism, only a short time after our visit! 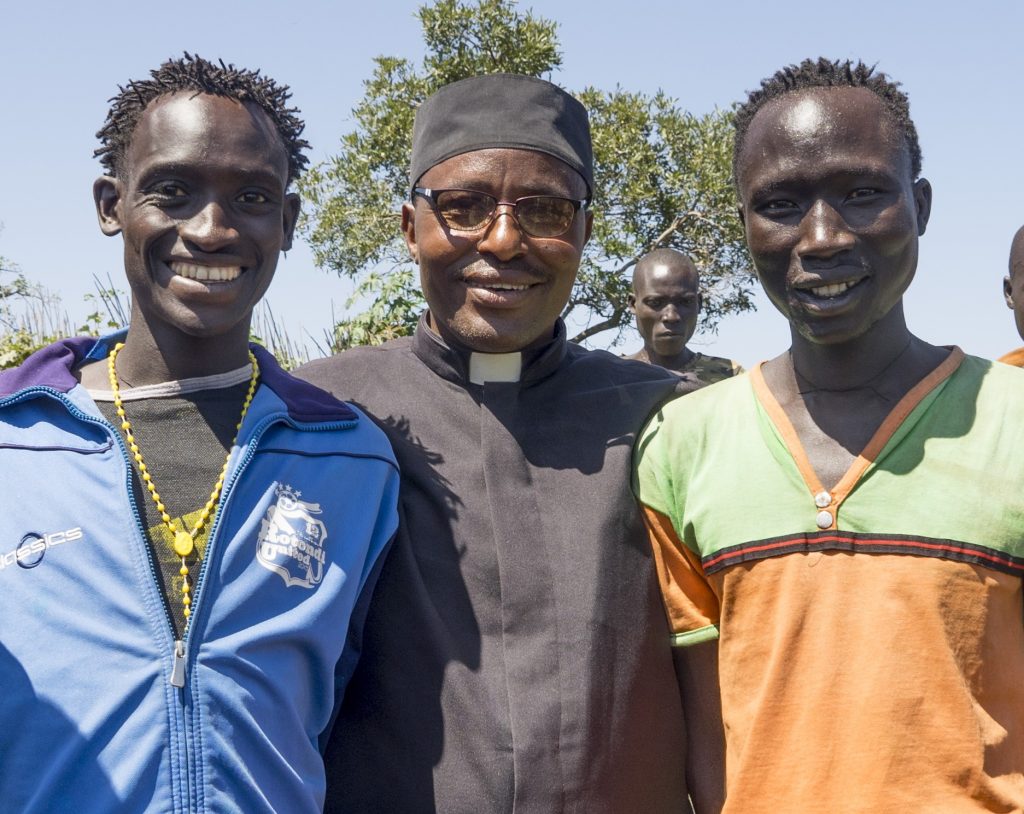 Fr. Teklemarian Amanual with the two young men who requested a priest be sent to their tribe.

To reach the Gumuz tribe, we first made a several-hour trip to Banush. Then, Fr. Teklemarian left his vehicle at a small village, and we began hiking. We had no idea how far we had to go and expected to arrive there quickly. Boy, were we ever wrong! We walked for several miles up small mountains, down deep valleys, and across several streams—two of which we had to pass over by jumping rock to rock!

When the priest finally said we were close, he pointed at a neighboring mountain with a blue tarp stretched between poles, which was barely visible, and told us that was our destination. We all groaned inwardly. I kept reminding myself that St. Paul had it much worse. When we finally arrived, the whole village greeted us. It was quite a sight and made us so glad that we had come. The Gumuz are some of the last of the hunters and gatherers, and by their clothing we could see they were poor. Some of the children had the red hair of malnutrition.

I shared with them the basic salvation message and told them they had been chosen by God and that He has a plan for their lives, to bless and prosper them and give them a future filled with hope. I then led them into a prayer of commitment to Jesus. Father asked me to speak on baptism, and I told them that while they were already followers of Christ, baptism was their full incorporation into the family of God. I told them it is more than a symbol; it is a true transformation, as they become a brand-new creation. I told them they would then receive the Holy Spirit, and He would empower them with gifts of healing, preaching, and teaching so they could then go and evangelize others in their tribe.

Nancy then taught on the necessity of forgiveness, and we did the skit where she carries me on her back and God asks her to forgive me. When she does forgive, she starts dancing and asks them: Did I do that for him or for me? They all say, “For you!” The message got across! During quiet times, you could hear the coughing and wheezing of the children. They have no access to healthcare. 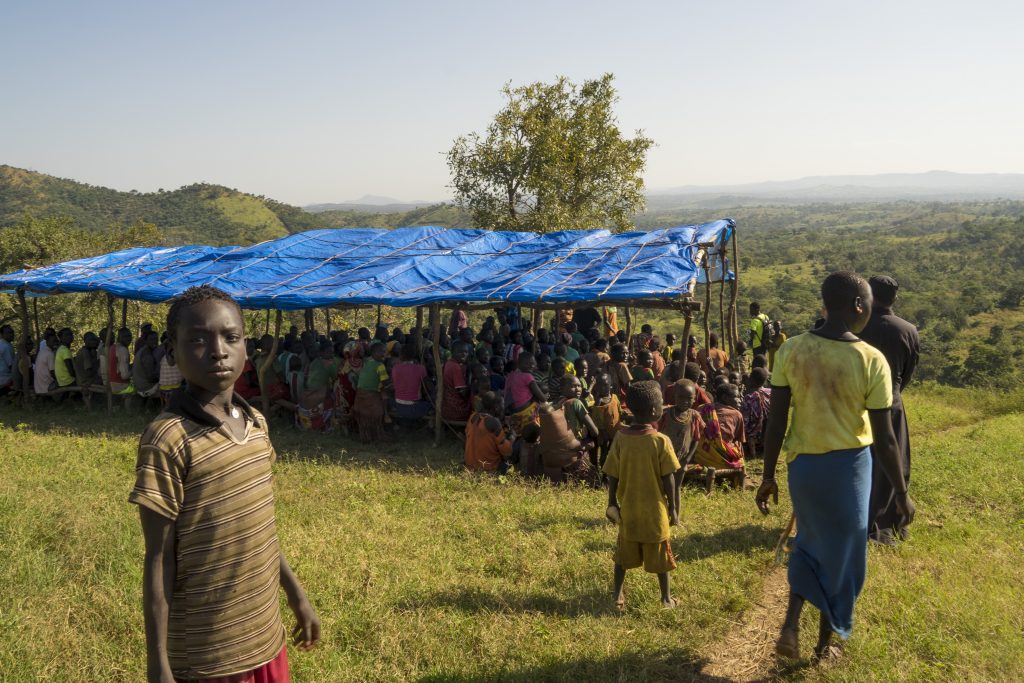 During the team’s time with the Gumuz people, church was held under this blue tarp.

As it was getting late, we decided to leave, so we could get back before dark. We were dreading the walk back, but somehow it seemed easier. I am sure it was God saying, “Good job.” That night, we had the pleasure of ministering to thirty young Gumuz men who were attending school in Banush. The Catholic Church provides them with room and board at no charge. At the request of Fr. Amanual, I gave the basic salvation message, and Nancy taught on the call to holiness and the moral life. They had many questions, and it was such a pleasure to see their interest in what we taught and respect for the priest and one another. Before we left, we prayed with them for wisdom, understanding, and knowledge, and they were very happy.

Good things are happening in Ethiopia!