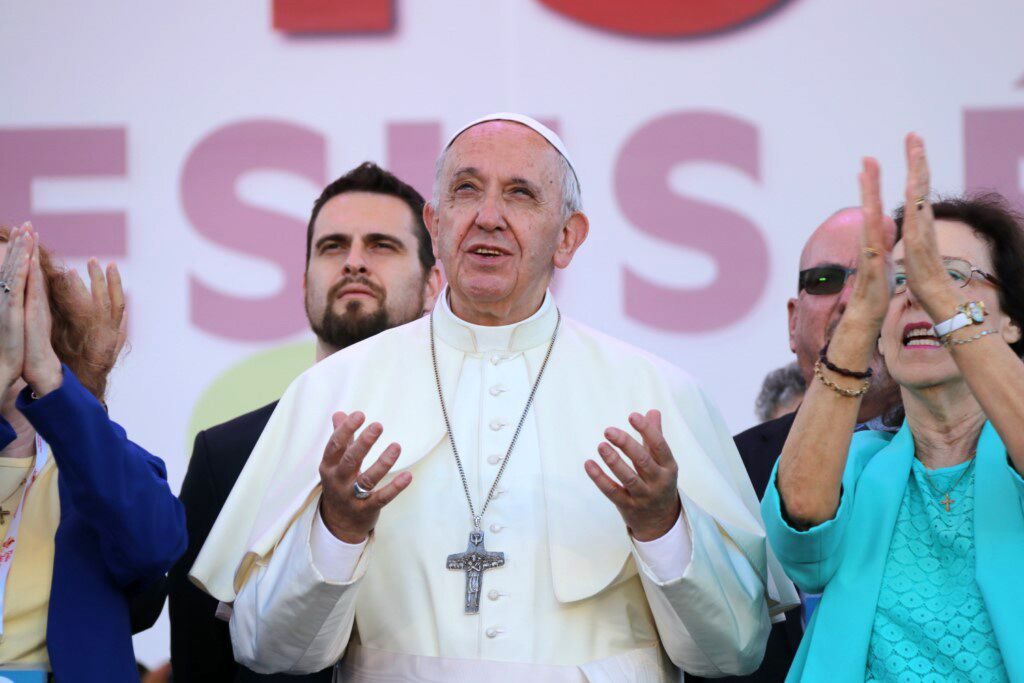 Pope Francis and Patti Mansfield offer praise during an event for the Golden Jubilee of the Catholic Charismatic Renewal.

The following article, which originally appeared on zenit.org, discusses the meditation Pope Francis shared during the recent Golden Jubilee of the Catholic Charismatic Renewal. Ralph Martin was among the speakers for the Golden Jubilee events.

Acknowledging that Pentecost Sunday marked the ‘birth’ of the Church, Pope Francis has stressed: “The coming of the Holy Spirit transforms men [who are] closed because of fear, into courageous witnesses of Jesus.”

Pope Francis made this observation on the afternoon of Saturday, June 3, at Rome’s Circus Maximus for the Vigil of Pentecost and an ecumenical prayer, on the occasion of the Golden Jubilee of Catholic Charismatic Renewal, which ended the next day, Sunday, with the Mass of Pentecost, which he presided over in St. Peter’s Square.

The Holy Father also decried all those being persecuted and killed for their faith, now more than ever, and stressed, “All Christians are united by blood of the martyrs.”

On the stage with the Pope, were leaders of Charismatic Renewal and representatives of the Evangelical and Pentecostal Churches and other religious confessions.

The meeting was preceded by songs, readings and testimonies, and introduced by the meditations of Father Raniero Cantalamessa, O.F.M., Cap., Papal Household Preacher, and by Pastor Giovanni Traettino of the Evangelical Church of Reconciliation.

Here is a working translation of the Holy Father’s meditation, pronounced during the course of the meeting.