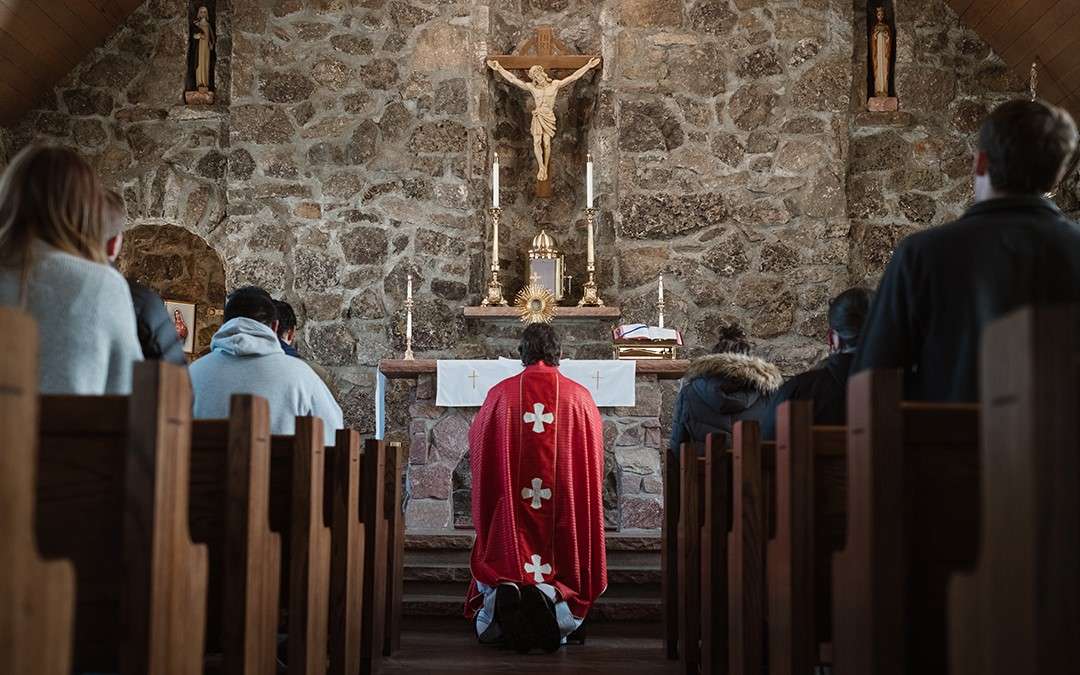 RM: Your video about joining our suffering with the suffering of Christ had tremendous insight. I would like you to share some of that. First, though, please tell us about yourself.

FJB: I was raised in a Catholic family. I wandered away from the faith, but God’s grace brought me back. I earned my doctorate in philosophy and then sensed a call to the priesthood and the Dominicans. I was ordained in 2010 and now teach philosophy and some theology at the Dominican House of Studies in Washington, DC. I also travel the US giving retreats for college students, young adults, and various groups.

RM: The theme of St. Dominic is sharing out of your contemplation and the balance of contemplative and active. The Eastern Province has a significant intellectual apostolate that provides material about faith and reason—including a video series and a lecture series on truth issues at prestigious secular universities.

FJB: There has been a renewal of the Dominican order in recent years. The Lord has granted us this grace of teaching and preaching on secular campuses through the Thomistic Institute. We also have a series of YouTube videos called Aquinas 101 and a network of student chapters on college campuses that invite Dominican friars and Catholic professors to give talks.

RM: What is the Lord showing you about suffering and offering it up?

It’s important for us to understand what it means to offer it up, because we’re all going to suffer. The good news is that our suffering can make a big difference in the grace that the world receives. If we join our sufferings to the cross in love, we can obtain through Christ the outpouring of the grace of the Holy Spirit upon the world. This is the only way that the grace of the Holy Spirit is given to the world—through Christ’s sacrifice and the sacrifices we offer with Him.

During WWII, American Catholic servicemen were issued a prayer book with a Mass clock so they could find out where Mass was being offered at any time. They could unite all their sufferings at that moment to the Mass being offered in New York, Paris, Jerusalem, or wherever. That’s how seriously Catholics once took this idea.

RM: Why did this understanding almost disappear?

FJB: The cross of Jesus is never a popular message. To preach the cross has always been a source of scandal. It’s hard to speculate why the proclamation of the cross has waned, but it’s the message that saves the world and there’s a need to proclaim it now more than ever before.

RM: Why does Christ’s cross save the world?

FJB: Jesus is the eternal Son of God. His Sacred Heart was filled with love, and out of an act of obedience to the Father, He chose to lay his life down on the cross (Jn 10:18). Because his death was an act of love and obedience, it had an ineffable value in the eyes of the Father sufficient to merit the salvation of the entire human race and all sins past, present, future, or possible.

RM: A lot of people today don’t feel like there’s anything we need to be saved from. They don’t understand the concept of sin and think there are just mistakes and failures.

FJB: Everyone has a conscience and knows the difference between right and wrong. Everyone has received some measure of light about good and evil. Everyone is weak according to the flesh. The Church’s teachings are clear that unless a person is living in a state of grace, that person will sooner or later give himself or herself freely to mortal sin. We all need to be saved by the grace that comes to us thanks to the cross of Jesus Christ.

RM: We all need to be saved from the reality of original sin, from the actual sins that we’ve committed, from being a slave to the culture we’re living in, and from being a slave of the devil, who Jesus says is the ruler of this world. If you’re not in Christ and availing yourself of his sacrifice, you’re in grave danger of being enslaved by the world, the flesh, and the devil, and being lost forever.

Mary told the children of Fatima to accept their sufferings and offer them in reparation for sin and the conversion of sinners. She said many souls are going to hell because so few people are willing to pray and offer sacrifice for them. This relates to what you’re saying.

FJB: All the saints have a keen awareness of the need to offer sacrifices to make satisfaction for the sins of the world. Christ’s sacrifice is not insufficient; it is a call to participation. We’re called to participate in his work of offering sacrifice out of love, and all the saints felt that call deeply.

Only in the last several decades has this theme fallen out of the ordinary consciousness of Catholics.

RM: Thank you for bringing it back. Many people wonder why we make reparations for sin. People wonder whether it’s important that sinners are converted and whether there is such a thing as sinners. This gets to the heart of the confusion and the virus of Universalism running through the Church.

FJB: Twentieth-century popes talked about the erosion of the sense of sin, and only the Spirit can awaken the conscience so people can be converted. Bl. Conchita, from the early twentieth century, was convinced that God wanted to renew the face of the earth, and particularly the priesthood, through the outpouring of the Holy Spirit. She believed this outpouring would not happen unless everyone joined hearts with Christ on the cross, offering their sufferings to the Father.

There is the royal priesthood, which unites all the baptized to Christ, and there is the ministerial priesthood. Only the ordained minister can make the sacrifice of Christ present on the altar. But all the faithful are called by virtue of their baptism to unite with Christ’s sacrifice. They can join in that prayer and say to the Father, “This is my body which will be given up for you.” Jesus, the High Priest, lives in those who are living in grace. He gathers their sufferings into his hands, and He offers all of us to the Father.

RM: We need to tell people not to waste their suffering. Join it to the suffering of Christ.

FJB: Mass is the time to unite our sufferings with Jesus and to say, “This is my life, these are my sufferings. I offer all of it to You, Father.”

RM: We need to ask the Holy Spirit to bring us back to all these truths of the faith that many people have drifted away from.

Paul says, “I make up in my own body what’s lacking in the sufferings of Christ” (Col 1:24). Nothing lacks in Christ’s sufferings, but He gave us a chance to participate in the salvation of the world.