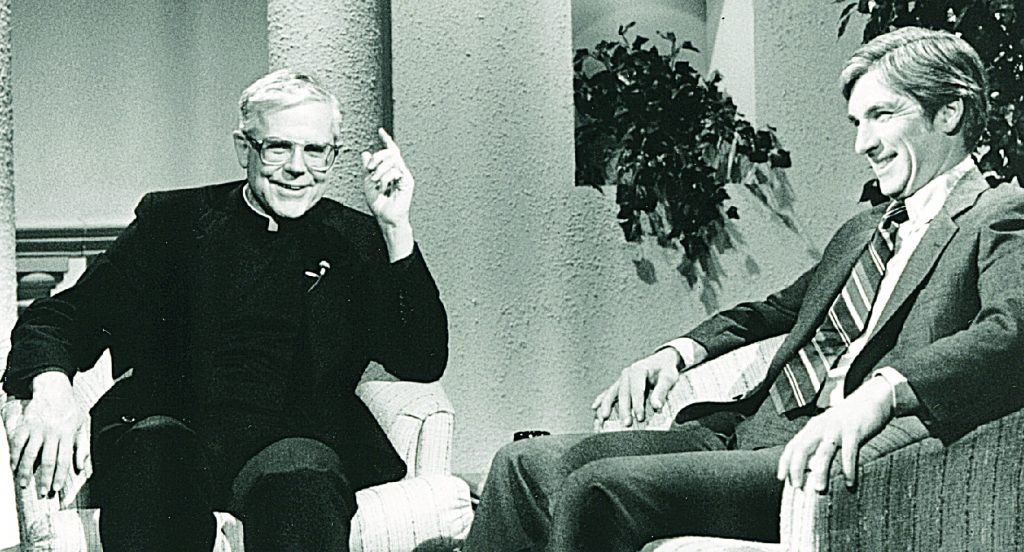 Fr. Michael Scanlan and Ralph Martin on the set of “The Choices We Face.”

President Emeritus of the Franciscan University of Steubenville Father Michael Scanlan, TOR, passed away Jan. 7. According to the university, “His leadership as president transformed Franciscan University from a struggling regional college into a world-renowned leader in Catholic higher education and helped to inspire a restoration of faithful Catholic education in the United States and the world.” Fr. Scanlan played an influential role in the lives of Ralph Martin, Sr. Ann Shields, and Peter Herbeck. He also helped lead FIRE Rallies around the world and served on Renewal Ministries’ Board of Trustees. Below, Ralph pays tribute to Fr. Scanlan. His testimony also can be found here and is mentioned in this National Catholic Register article about Fr. Scanlan’s life.

Eternal rest grant unto him, O Lord. And let the perpetual light shine upon him. And may the souls of all the faithful departed, through the mercy of God, rest in peace. Amen.

I’ve known Father Michael Scanlan, TOR, since the ‘70s and served side by side with him in the Charismatic Renewal, in the worldwide FIRE rallies, in his work at renewing Franciscan University, as a member of Franciscan University’s Board of Trustees for twelve years, and as a visiting professor in the summer.

Father Scanlan embodied and contributed to, in a significant way, a response to and an advocacy of the “new Pentecost” and the “new evangelization.” He embodied and advocated for the necessity of including both the contemplative and charismatic dimensions of the Spirit’s work in any balanced response to the call for authentic renewal.

But one of the most moving experiences I’ve ever had in my life happened because of Father Mike. In 1980, I gave a series of lectures called A Crisis of Truth, which addressed a number of serious issues in the life of the Church. The subtitle of the book by the same title was: The attack on faith, morality, and mission in the Catholic Church. It dealt with a number of controversial issues in the Church. Not having much in the way of theology credentials at that time, it was a bold thing to do. And then one day, I received a call from Father Mike. “Ralph, I’ve been listening to your talks on A Crisis of Truth, and I just had to pull my car over and give you a call right away. The Lord has told me to stand with you, side by side with you, and travel with you and support you in this really important message. I have the credentials that you don’t have, and I want to use them to endorse what you are doing and protect you from the counterattack that will come.”

I received this call with an overwhelming sense of love and gratitude, that the Lord would help me in this way, and that someone like Father Mike would literally stand side by side with me for years as we traveled all over the world giving this message.

This was one of the most deeply moving experiences of my life and one for which I am forever grateful. I look forward very much, God willing, to our heavenly reunion! 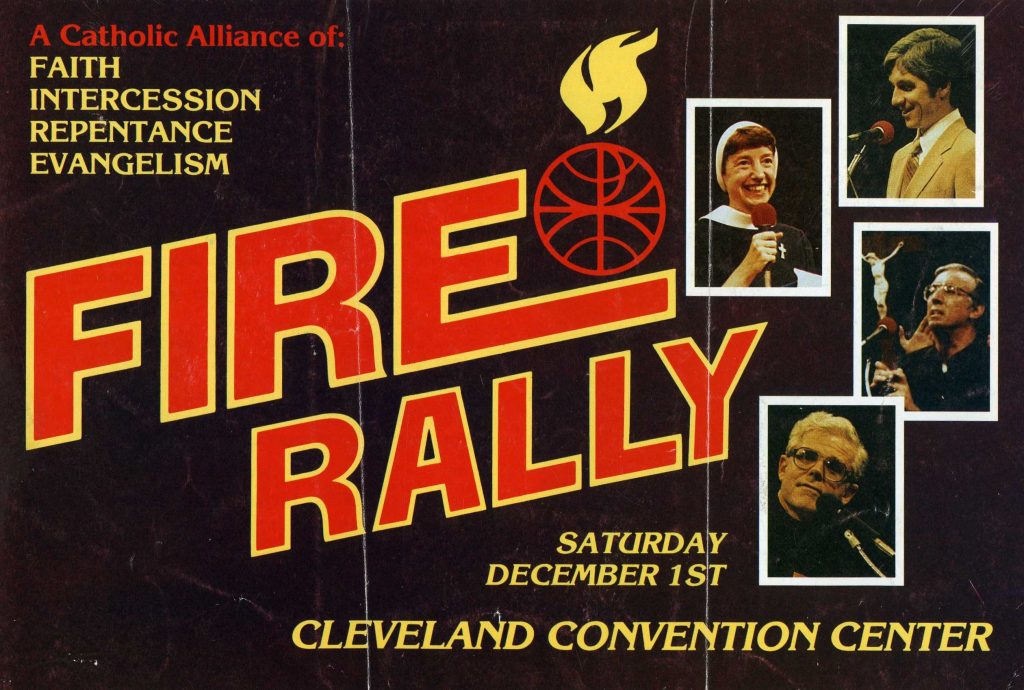 Fr. Scanlan and Ralph Martin are both pictured on this Fire Rally advertisement.

I am driving to the Pittsburgh airport and listening in the car to Ralph’s talk on The Crisis of Truth. I am so deeply moved by his message that I stop in my journey and call Ralph to tell him that I have decided to stand with him and for him—to support him in every way I can, so that this word is given to God’s people. Ralph accepts my offer and we begin to travel together. I introduce Ralph and after his talk, I follow with a commentary on pastoral application and problems, usually directed especially to priests.

I remember being in Toronto for The Crisis of Truth. The sponsors were a citywide grouping of clergy, including prominent Catholic, Protestant, and Pentecostal clergymen. Speaking in the largest Anglican cathedral in Canada, we were introduced and welcomed by an Anglican bishop, the head of the Assembly of God Church in Canada, the diocesan liaison for the Catholic Charismatic Renewal, and a variety of other clergymen representing a true cross section of Canadian church life. I felt led to conclude our talks with an altar call, and literally hundreds of those present came forward to ask for prayer for various needs. It was a moving opportunity to be in contact with the needs of God’s people, and we were the last ones to leave the cathedral that night, in the midst of an early snowstorm.

Our first FIRE (Faith, Intercession, Repentance, and Evangelism) rally was held at the Meadowlands Arena in New Jersey on the eve of Pentecost. Ralph, Fr. John Bertolucci, Fr. Jim Ferry, Sr. Ann Shields and I shared the Ministry of the Word together. Over 13,000 people attended the rally and we felt that God’s word was truly spoken and the response of the people was inspiring. 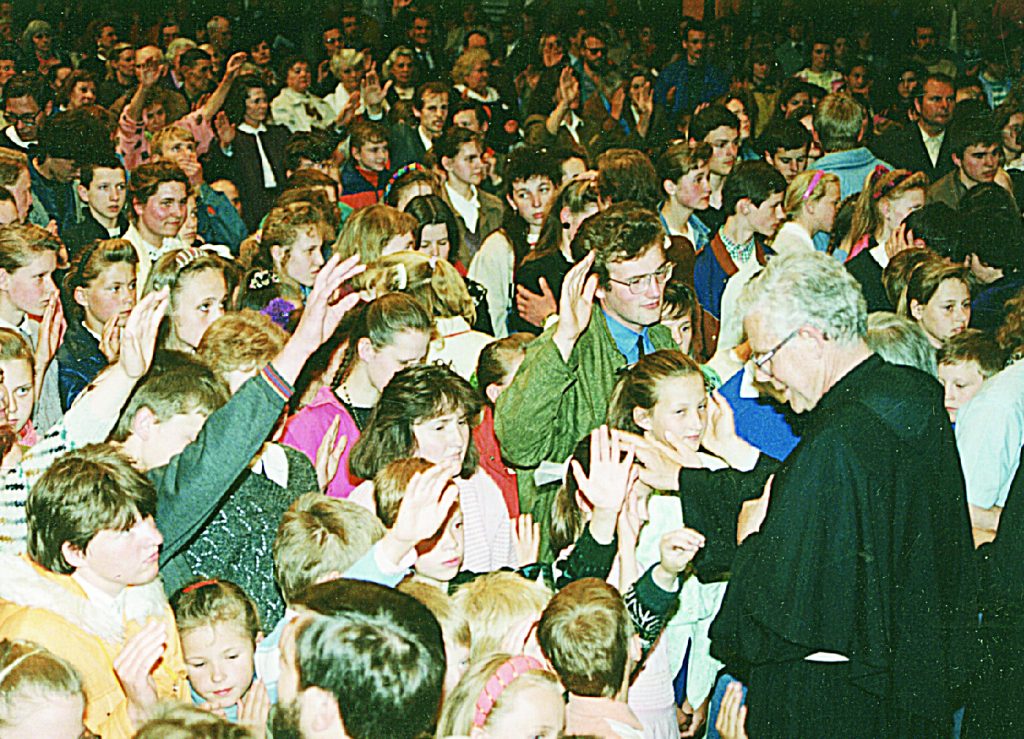 Ralph and Fr. Scanlan conduct the first Fire Rally in Lithuania for 1,000 people.