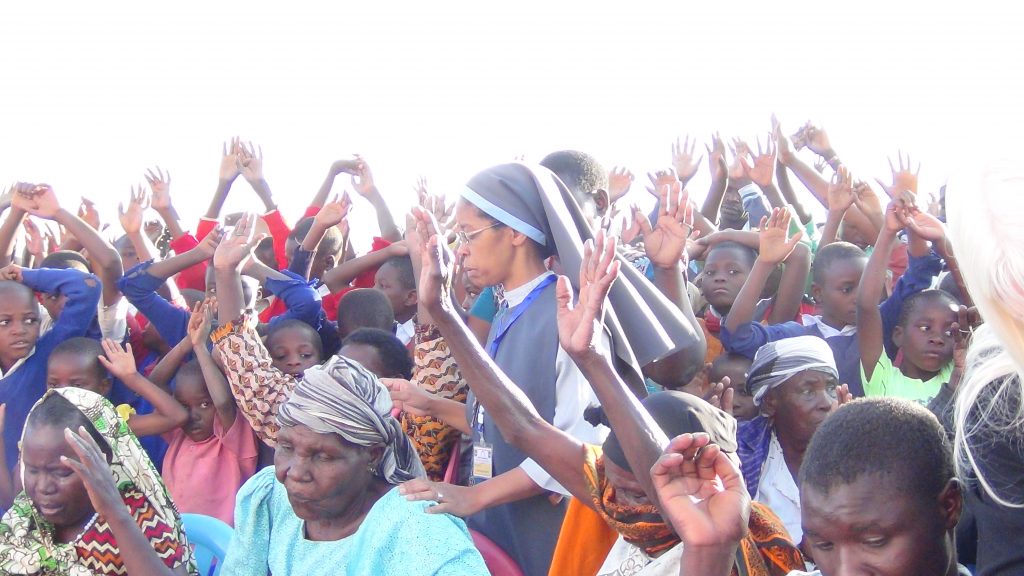 A member of our mission team ministers to people during a time of prayer.

Renewal Ministries has made twenty mission forays in seventeen dioceses into the vast country of Tanzania. We have introduced renewal events with several days of outdoor Catholic rallies every time. We also have visited some of the dioceses multiple times.

Bishop Beatus Christian Urassa invited us to serve in Sumbawanga, a town (and diocese) in the far-western reaches of Tanzania. Our team included brothers and sisters from across the US and the world, including Nairobi, Slovakia, Kenya, and Tanzania.

The name of the town “Sumbawanga” literally translates as “throw away your witchcraft.” This originated with local spiritual healers who wanted to keep away intruding witch doctors. Superstition and the practice of the “dark arts” are still prevalent in the area. The town is famous for the practice of witchcraft; to be a witchdoctor from Sumbawanga is a claim to fame, a boast that appears in Internet ads.

Our schedule included ten days of intense ministry in outdoor Catholic preaching rallies, and daily workshops on Catholic faith, youth, and young adult ministry. Our family life workshop was of special interest to Bishop Beatus and the vicar general. It featured intense teaching on the evils of abortion, the consequences of contraceptives, Natural Family Planning, and the basic principles of Theology of the Body.

When we arrived, we learned that the retreats we had planned for religious sisters and priests had been cancelled due to opposition. There are two large orders of sisters in the diocese who had been told by their superiors that any sister attending our events would immediately “lose their veil.”

Although disappointed, we immediately put the matter to prayer and the Lord’s providence. Our team moved into “Plan B” mode. The Lord did not disappoint. The people of Sumbawanga and far-reaching areas were like dry sponges thirsting for God. People from surrounding towns came with their families and slept on the grounds of the two local parishes, caring for their children and cooking on open fires. The response to all of our events was beyond anything we had imagined for a first-time effort like this.

I want to share with you our team members’ responses regarding this mission:

“God´s presence was overwhelming. People were touched by Jesus in a powerful way. About 2000 people were present on Sunday. Every day, more and more people listened to God´s Word. On Wednesday, there were about 4000 people; on Friday, many more; and on Saturday, more than 5000 people attended, hungry for the living God. Every day, people gave testimonies of physical healing. They spoke of being filled with God’s presence and love. Many were delivered from evil spirits as God poured out grace like waves into their dry hearts. How hungry they were! His Word was like an oasis in the desert. You could see smiles and joy on their faces. Many sat in the dust, some under trees, and some up in trees. I met young people hungry for God´s love. They had so many questions about forgiveness. God touched their hearts incredibly and led them to forgive.” —Bohdan Novak

“One thing that moved me was the openness of school children we visited. They discovered they could love because God had loved them first. We prayed for them, asking God to fill their hearts with His love. They came to hear God’s message with joy. They responded well when prayed with for inner healing. They prepared their hearts by surrendering all to Jesus, and then they invited the Holy Spirit into their hearts. God started a great work in them, and I am sure He will continue it.” —Sr. Damiana

“At the afternoon rally, I was touched by the faith, joy, and gratitude of a man whose liver was completely healed. For a while, he was dancing and praising God. His whole liver was infected and swollen. He spent most of his income for treatment with different doctors without success, because the infection kept coming back. The Lord healed him completely. His doctor testified this as well when he went for another checkup.” —Sr. Mary Justin

“This marked my seventeenth journey to Africa in twenty years. What impressed me the most were the similarities of the people today with those living in New Testament times. I reflect on journeys of the Holy Family to Jerusalem, the birth of Jesus, the presentation in the temple, and the finding of the lost child in the temple. We witnessed hundreds of people who traveled great distances by foot and other difficult means to arrive at the church grounds to set up camp for two weeks. They built fires, prepared and ate meals, washed clothes, and slept on the ground and floor so they could attend the daily workshops and rallies. Truly, a faith-filled people!” —John Mathe

Never before in Tanzania have we seen so many babies and children! Hundreds of babies were in attendance at every event, and the cathedral was constantly overflowing. In Sumbawanga, one of the poorest areas economically in Tanzania, life is precious. Young women consider childbirth a sign of maturity and prestige. Most all women have ten to twelve children.

“I think it will take me many months to fully comprehend the depths of God’s love and works amongst His people in Sumbawanga. The hunger for Him was so powerful. Surely, the Lord satisfied that hunger with abundance.

“In every workshop, every rally, every divine appointment, God was powerfully present and dwelt in each and every soul. Their eyes, faces, and entire beings showed their grateful hearts to their God for what they were learning and experiencing. His presence was so real and so beautiful.

“The prayers were raw and honest, and the youth prayed them with all their hearts while tears streamed down their faces. They prayed not only for themselves but for the others. They opened their minds and hearts deeply to their God and in turn were touched by the very heart of God. Such love!

“I want to thank you again for all you do, especially in making sure we always have the (fetal models frequently used on our missions to help participants gain a more clear understanding of the various stages of life within the womb) to take and leave with the people. Words can’t do justice to the power they have. The Lord pours Himself out through them. I am in awe every single time we show them. Being able to leave them is huge. It is another way Renewal Ministries deeply, deeply touches the hearts of God’s people everywhere. It is going to be so awesome in heaven to see face-to-face all the babies and their families that were given life because of how the Lord uses these little models.”