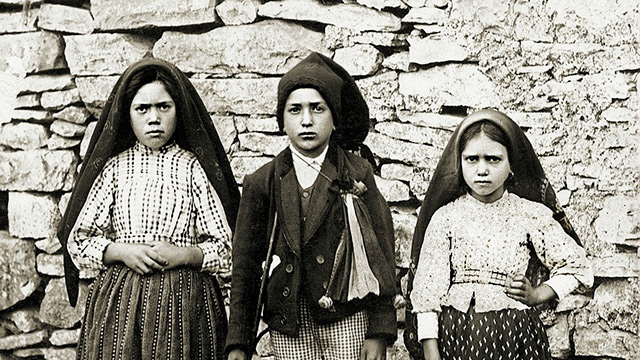 Today, on the one-hundredth anniversary of the final Fatima apparition, I want to share with you about my recent time in Fatima, where I spoke to a capacity audience of 2,300 people. Thankfully, Anne was able to join me, as the organizers invited her and paid her way, which is quite rare. I think Mary wanted us both there and inspired them to do so. It was good to share this special grace together. The conference celebrated fifty years of the Catholic Charismatic Renewal and the one-hundredth anniversary of Mary’s messages there.

Like many of you, I have been familiar with the events and message of Fatima for many years. I was even there, many years ago. I wasn’t expecting anything special to happen during this visit, but something did. Once again, a surprise of the Holy Spirit! Before I share that story, let me recount what happened at Fatima a century ago, for the sake of those who haven’t heard or have forgotten.

In 1917, an angel appeared three different times to three small children—ages seven, nine, and ten—who lived in a small rural village. There was a brother and sister, Francisco and Jacinta, and their slightly older cousin, Lucia. The angel, which identified itself as the Angel of Portugal and the Angel of Peace, taught the children two prayers. The angel prayed with his forehead touching the ground and taught the children the profound reverence owed to God. They forever after often prayed like that themselves.

Mary then appeared to the children once a month for six consecutive months. She revealed to them three secrets, which they could only reveal at a later time. During her last appearance in October of 1917, she manifested the “miracle of the sun,” which was viewed by perhaps 70,000 people and reported on in Portugal’s secular newspapers. A very important part of what she communicated to them was the reality and horror of hell, where “many sinners go.” She very briefly gave them a vision of hell, where they saw the suffering of the lost souls and the horror of the demons. Mary told them that many souls go there, because there is no one to pray and offer sacrifices for them, and she asked the children to do so. She also asked them to pray the rosary every day for peace.

This vision and Mary’s words both deeply impacted their souls, and they fervently responded to her request. Little Jacinta would often ask her brother and cousin: “Have you sacrificed for the conversion of sinners today?” They would often give their lunches to poor children, go without drinking water for long periods of time, and do other sacrifices. Mary also asked the children to offer the suffering that would come their way, as well as their voluntary prayers and sacrifices, for reparation for the sins that are so offending God and Mary. She told them that the present war, World War I, would end soon, but unless there was repentance from sin, there would come a greater and worse war, and that war was a punishment for sin.

Mary said a sign would be given before the beginning of the next war, if there was not sufficient repentance. Indeed, that sign was given in 1938—one month before Hitler annexed Austria—and was seen throughout Europe as an aurora borealis. She also warned that if there wasn’t repentance, Russia would spread its errors throughout the world, whole nations would be annihilated, and the Church would suffer much.

Mary also told the children that she would take Jacinta and Francisco to heaven soon, but that Lucia would need to learn to read and write, as she needed to stay on earth longer, in order to witness to this message. Lucia died in 2005, at the age of 97, in a Carmelite monastery. Francisco died in 1919, not yet ten, of the flu epidemic that swept the world at that time, and Jacinta in 1920, at the age of ten. Mary told Jacinta that if she was willing, she would suffer much and die alone in a hospital, but Mary would be with her. In a brutal operation, the doctors removed two of her ribs. Jacinta was so weak, she couldn’t have general anesthesia, the local anesthesia was ineffective, and she died alone in a Lisbon hospital.

Jacinta and Francisco were officially proclaimed saints this year, by Pope Francis at Fatima, and the cause for Lucia has begun.

So what struck me so deeply? The children—their totally fervent, wholehearted focus on the salvation of souls, and how they focused their whole way of life and each and every day on prayer and sacrifice for the conversion of sinners. It would take me more space than we have to tell you all about this, but suffice it to say I was deeply inspired and challenged to do more myself. As I visited each of their graves in the Basilica of Fatima, as as I read Lucia’s Memoirs, I felt like I was being given new friends, new models, by the Lord, to help me in my own spiritual journey and our work for souls.

Pray, fast, and offer sacrifices for the conversion of sinners, for peace in the world, and for mercy. As Jesus said as He began preaching: Repent! For the kingdom of God is at hand.

These prayers were taught by the angel to the children:

“Most Holy Trinity, Father, Son and Holy Spirit, I offer You the most precious Body, Blood, Soul and Divinity of Jesus Christ, present in all the tabernacles of the world, in reparation for the outrages, sacrileges and indifference with which He Himself is offended. And, through the infinite merits of His most Sacred Heart, and the Immaculate Heart of Mary, I beg of You the conversion of poor sinners.”

“My God, I believe, I adore, I hope and I love You! I ask pardon of You for those who do not believe, do not adore, do not hope and do not love You.”

These prayers were taught by Mary to the children:

“O my Jesus! Forgive us, save us from the fire of hell. Lead all souls to heaven, especially those who are most in need.”

“Oh my Jesus, I offer this for love of Thee, for the conversion of sinners, and in reparation for the sins committed against the Immaculate Heart of Mary.”

The children were moved by an interior impulse to pray this prayer:

“Most Holy Trinity, I adore Thee! My God, my God, I love Thee in the Most Blessed Sacrament.”