‘The Renewal is Alive and Well in Brazil!’

Ten thousand seats sold out for the CCR National Leaders’ Formation Conference in Brazil, at which Dr. Mary Healy spoke last weekend. She said, “There was a special grace on the conference.”

I was in Brazil last weekend for the national leaders’ formation conference of the Charismatic Renewal. The Renewal is alive and well in Brazil! Although this gathering was only for leaders, the 10,000 seats were already sold out last October. There was a special grace on the conference this year, as we were celebrating the Golden Jubilee of the Catholic Charismatic Renewal.

The conference was held in Aparecida, the spiritual heart of the country. There stands the second-largest church in the world: the Basilica of Our Lady of Aparecida, named for a small statue that was found by three fishermen in a river in 1717. The convention center was right next to the basilica, and we were able to celebrate Mass there on Friday.

The Charismatic Renewal in Brazil is the most organized, intentional, and forward-looking that I have seen anywhere in the world. There were fifteen series of workshops, which people attend based on the ministry they are involved in (for instance, intercession, healing and deliverance, preaching, youth ministry, priests, political involvement, renewal of universities, etc.). At the workshops, they receive really solid formation and practical instruction. They all know the story of the Duquesne Weekend in 1967, which launched the Catholic Charismatic Renewal, and the earlier story of Blessed Elena Guerra and Pope Leo XIII, which is linked to the origins of the Pentecostal revival in the early twentieth century.

Archbishop Alberto Taveira, the episcopal advisor for the Renewal, celebrated Mass and was present for most of the conference. About 130 priests participated, including two who are nationally known and loved, Fr. Jonas Abib and Fr. Ed Dougherty, both of whom have founded Charismatic TV networks that reach tens of millions of viewers. Fr. Jonas told the story of how Fr. Ed, as a young American Jesuit missionary, was prayed over for baptism in the Spirit and brought the Renewal to Brazil in 1969. Another American priest, Fr. Bob Di Grandis, played a key role in teaching the Brazilians how to exercise the charisms. 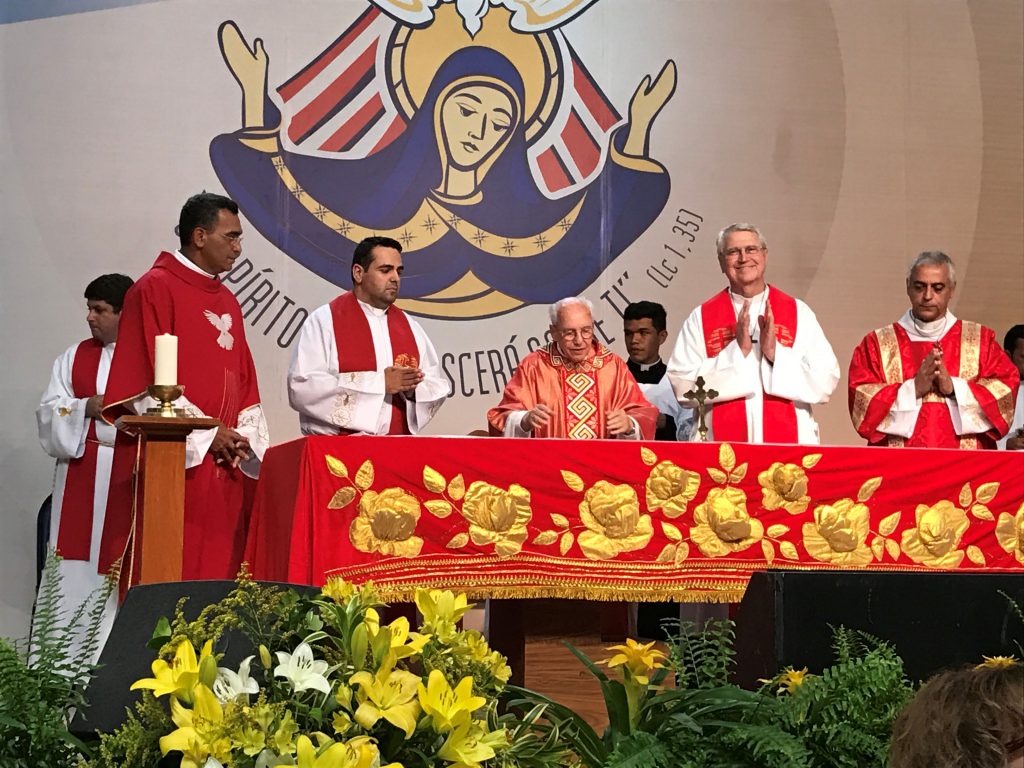 Fr. Jonas Abib, the celebrant, is pictured in the middle; next to him on the right is Fr. Ed Dougherty.

Beautiful talks were also given by Katia Zavaris, the leader of the Renewal in Brazil, and by Cyril John, a dear brother from the Charismatic Renewal in India, who has a gift for teaching about Spirit-led intercessory prayer.

I led two main sessions and four workshops. Being in Brazil, and anywhere in Latin America, means learning to “go with the flow.” There were lots of jokes about “Brazil time.” You might be told you have an hour for your talk, but then as you are about to begin, they say, “You have an hour and a half, then time for questions.” Or as you walk onstage, “Right after your talk, you’re going to lead the time of adoration with the priest.”

In many ways, I experienced the Lord making much of my little. During the time of Adoration, I led people in renouncing various obstacles to the Holy Spirit’s work in us, including unbelief, fear, and a sense of unworthiness. Although I usually spend the most time on unforgiveness, somehow I forgot to cover it, except for the briefest mention. Later that day, a young man came up to me and said, “Thank you! What you said about forgiveness changed my life. I was so angry at my father, because for most of my life he was absent and lived far away. But through you, God told me I had to forgive him, and it has opened me in a new way to the Holy Spirit.” Amazing!

During my talk for the healing and deliverance workshop, I used as an example from my book on healing: “What would you think of a doctor who, upon diagnosing a patient with cancer, says to him, ‘Sorry, I’m not going to treat you because it’s better that you simply accept this cross in your life. Offer it up.’ Of course, such a doctor would be fired on the spot.” This time, for some reason, instead of “cancer” I said “lung cancer.” Afterward, a woman in the front row told me, with tears in her eyes, that she had lung cancer, and right before the talk had asked others to pray over her for both physical and spiritual healing. During the talk, she felt a burning sensation in the area where the tumor was, and she felt that she had been healed. (She is now awaiting confirmation of that from a doctor.) 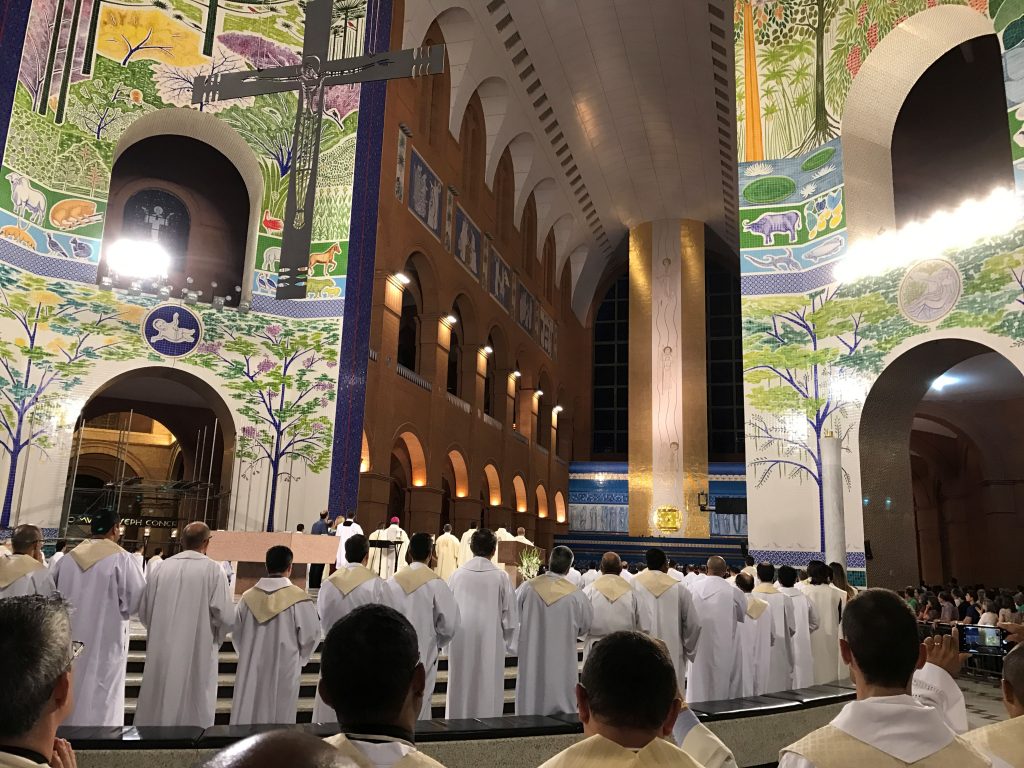 We celebrated Mass at the Basilica of Our Lady of Aparecida.

After the talk, the leader asked me to lead healing prayer. We only had fifteen minutes, so I led the quickest time of healing prayer I’ve ever done. But a long line of people came up to testify to healing. One woman said she had been hearing impaired for thirty years, so she generally could hear only fifty percent of the talks, but she was so longing to go home and share what she heard with her prayer group that she was begging, “Lord, please do something about this.” Now her hearing was completely clear! A young man said he’d had severe back pain for years, which was now completely gone. He bent down to show everyone how he could now touch his toes, pain free. Two women who had been unable to kneel knelt down in front of everyone, praising God.

For my second main session, “Return to the Upper Room,” instead of giving a talk, I led everyone in a time of repentance and in prayer for a new release of the Holy Spirit and his gifts. We then had a time of actual practice in using the gifts, including tongues and interpretation, prophecy, words of knowledge, and healing. It was wonderful to see many people who had never used these gifts, and who in some cases were nervous, coming up on stage to speak powerfully anointed words. There were some very specific words of knowledge about healing, and afterward hundreds of people waved their hands to testify to being healed.

At the end God gave me a prophetic word for the Renewal in Brazil, that He is calling them to transform the nation—not by their power, but by His. Then as I was rushing out to head to the airport, a young man stopped me to say he had seen fire over the whole crowd as I was speaking. Glory to God for all He is doing in Brazil!