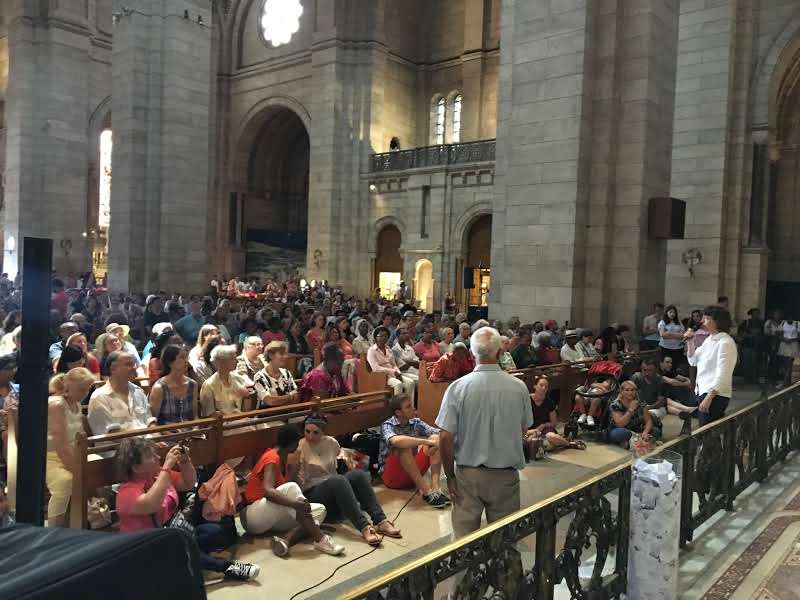 I joined Dr. Mary Healy for the first half of a month-long “tour de France,” in which she spoke in seven different locations about the Holy Spirit, healing, deliverance, and the gifts of the Spirit in evangelization. Many hearts were encouraged, and the Lord showed His favor and love through signs and wonders.

The trip began with about a thousand people who were on a pilgrimage to Lourdes led by the Beatitudes Community, a Charismatic community that includes priests, consecrated men and women, and lay people. Mary spoke on healing, explaining that in Exodus 15, God revealed His name as “the Lord who heals you,” and that we cannot separate healings from who He is. During the healing service, Mary reminded everyone of the story of the woman with the hemorrhage, challenging the audience to ask themselves whether they simply “bump into” Jesus, or whether they truly “touch” Him. That evening, about twenty-five people came forward during the healing service to testify to healings.

In Paris, Mary gave two days of teaching to Anuncio, an amazing group of young adults who engage in street evangelization. She then led a healing service at Sacré Coeur in Montmartre. Raphael Cornu-Thenard, the leader and founder of Anuncio, was worried that there might be low attendance, since it was a holiday weekend and the same day that France was playing in the soccer World Cup Final. But the Lord did not disappoint! Every seat was filled, and tourists walking around the basilica stopped to listen as Mary spoke about the great love of Jesus and how healings are the visible proof of His good news. When the time came to invite people for healing prayer, two long lines immediately formed and had the team praying for nearly two hours, ending only because they had to close the basilica, and the World Cup was about to begin!

We then took a train to a retreat center at Notre Dame du Laus in the Alps, near Italy, a site of eighteenth-century apparitions of the Virgin Mary. There was a conference of the Pentecost Fraternity, a network of Charismatic prayer group leaders from all over the country. Mary encouraged the members of Pentecost Fraternity to walk in the Lord’s power as they seek to evangelize the nation. She explained that the need for deliverance is great, because we are living in a culture of hedonism and paganism, in which the absence of God has led to all kinds of spiritual bondage. We need the supernatural gifts of the Holy Spirit as part of evangelization, so that the Gospel will be both seen and heard. Mary described two key prophetic moments in the Charismatic Renewal: the Duquesne weekend in 1967, when the Lord poured out “living water” on the students gathered in retreat, and the international leaders’ meeting in Bethlehem in 2013, when there was a power outage that became a prophetic sign of the divine power that the Renewal needs to seek from on high. On our last evening, the Lord gave His own confirming signs—as the meeting began, under a huge tent, there was a powerful thunderstorm with heavy rain and bolts of lightning.

During this “tour de France,” it became apparent that the Lord is bringing about a great renewal in France today, reclaiming this Catholic land for Himself. Through France’s renewal, there is hope for the revitalization of the faith in Europe. “France is in My heart, and My heart resides in France,” said the Lord to one missionary.

For the next part of the mission, I went to Les Dombes, a former Trappist monastery that is now run by Chemin Neuf, a Charismatic community that is similar to Beatitudes but is ecumenical. Chemin Neuf is responsible for twenty-five parishes in several countries, and they were holding a week-long training conference for hundreds of priests and lay ecclesial ministers from those parishes. I gave my testimony and a teaching on how to keep alive the flame of the Holy Spirit. Many of these people were new to the Charismatic dimension, and it was beautiful to see how the community members gently led them into an experience of the Holy Spirit and His gifts.

I joined Beatitudes again at Lisieux, where they were holding a retreat for about a thousand people, which included teachings and a healing service. One woman came who had great difficulty walking with two canes, because of multiple fractures in her legs from an accident. She had prayed a novena to St. Thérèse for her healing, and that night her prayer was answered! She held up her canes and showed everyone that she could now walk without any difficulty.

In Montpellier, on the Mediterranean coast, I joined Anuncio again, for their annual festival, in which they train and send out young adults to evangelize in the streets and on the beach. During the evening session on the second day, many of these young people gave their lives to the Lord for the first time. On the third day, the bishop celebrated Mass for them in a tent set up on the beach, and called each of them by name to send them out to evangelize in the name of the Church. Only at the end of Mass did they each find out what team they would be with and what city they were being sent to. It was very inspiring to see the courage of these young people and the depth of their desire to lead others to Christ.

Finally, at Hautecombe, a magnificent abbey on Lake Bourget, Chemin Neuf was holding its annual festival, “Welcome to Paradise,” during which more than a thousand young adults gather from many countries for spiritual formation (with talks translated into a dozen languages). I gave a workshop on signs and wonders as part of evangelization.

Everywhere I went, despite the steep decline of Christian faith in France, there were unmistakable signs of a new springtime. It was very moving to see how many people were willing to brave uncomfortable living conditions, often staying in tents, with no air conditioning and temperatures up to 100 degrees, in order to grow in their faith and learn to share it with others. It was also inspiring to see the generosity of the community members, who spend many long hours in prayer, preparation, and service to offer these life-changing events to others. Truly the Lord is rekindling the fire of His love in France, a land that has given the Church so many saints.