This article originally appeared in Renewal Ministries’ February 2019 newsletter, which can be viewed here. 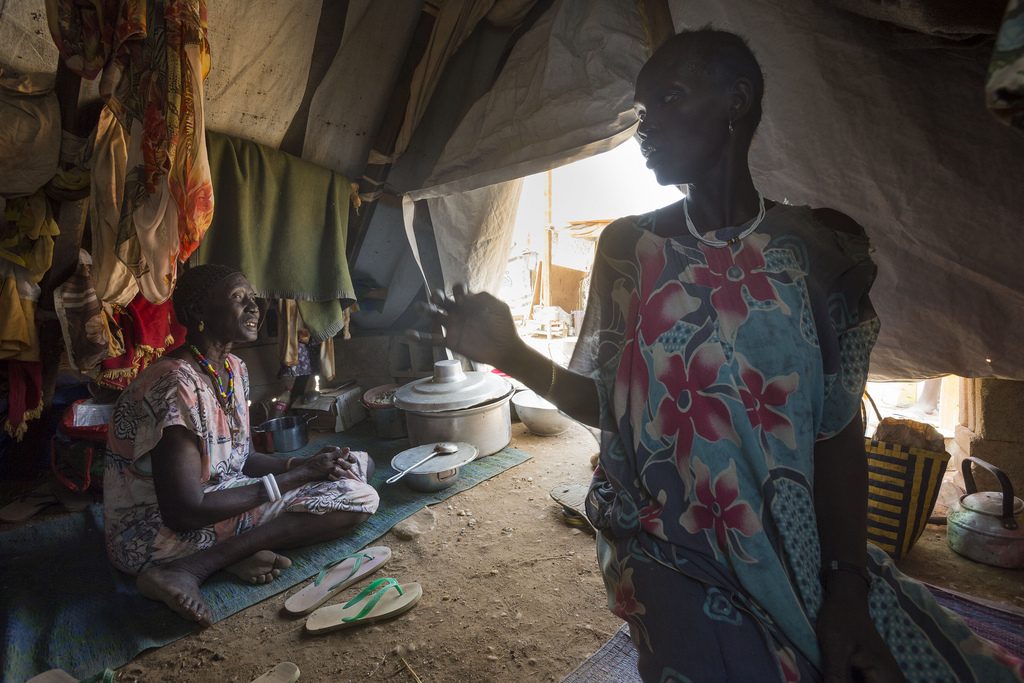 Sudanese refugees face difficult living situations and a country that has suffered through decades of war and suffering.  Image Credit

For more than twenty years, Renewal Ministries has supported the Emmaus Center, a Catholic community within Uganda that, while small, has borne much fruit for the Lord and continues to do so. For this month’s report, we want to share with you news from Emmaus’ recent outreach to Sudanese refugees. Although this was not a Renewal Ministries’ mission, our support of the Emmaus Center through the years has been such that we indeed rejoice with them in work well done and want to share with our readers some of the far-reaching effects of their support. As Nancy Greenhaw, one of Renewal Ministries’ country coordinators, reported in our August 2017 newsletter, the Emmaus Center is a “major force for good that has influenced not only Uganda, but countries all around Africa.”

This report outlines our first major outreach to the Sudanese refugees settled at the Bidi Bidi camp in Uganda. When we were there, more than 250,000 people were settled in the camp. We know the task is enormous, and we may not be in a position to reach out to this vast number, but we also know that the love of God compels us to contribute the little we can to help build their lost hope and faith in God.

While preparing for this outreach, which received financial support from Aid to the Church, in Germany, we made two key decisions that contributed
to its success. First, due to lack of a logistical meeting place in the camp, we held the program at an already established center and transported the sixty-one participants there. Second, rather than simply going to the camps and meeting with as many people as possible, we trained leaders. We decided to start training leaders so they could then mobilize their people. This plan worked very well. We were able to serve the entire catechist community and some key leaders from Bidi Bidi.

Before beginning our outreach, we received a special blessing from our bishop. He prayed for blessings for our team and expressed gratitude to us for reaching out beyond our diocese to meet the needs of our neighbors who are hurting as a result of the war. He said, “Take with you the healing touch of Jesus and serve with compassion all those afflicted emotionally, physically, and psychologically.”

We quickly discovered that the participants were hurting, demoralized, and in need of teachings on inner healing and reconciliation. The Holy Spirit inspired us, and we started by helping them understand why God created us and the purpose of our lives. We also taught on our value in Christ—our true identity. However, this was met with strong resistance from the participants, who were led to ask many questions: Where is God in our situation of South Sudan? Is He punishing us? Why has He allowed us to suffer since 1955? Why are other countries in peace while we are in permanent agony, like being in hell on earth? Where is God when we have had two generations go through war? Many similar issues also came up. This prompted us to have an open, fruitful discussion. The participants shared their painful stories. Afterward, we were able to bring them to the Lord. We used the opportunity of being before the Blessed Sacrament, where Jesus Himself could minister to His people.

One of the participants fell sick, and it was discovered that he was suffering from typhoid and malaria. In fact, many participants kept falling sick. And another participant wanted to leave, because he had only one shirt and one pair of trousers. Instead, we bought him some clothes so that he could continue.

We were shocked to learn that, although they were catechists, almost no one had a Bible, and if they had one, it was badly torn. We wanted to buy Bibles for all of them, but we had not prepared for that kind of expenditure. However, it may be worth providing these catechists with Bibles during our next visit, funds permitting.

In addition to a lack of Bibles, we discovered that many of the Catholics in the refugee camp are timid in living and sharing the faith. These concerns were expressed to us by Bishop Sabino Ocan Odoki of Arua, who we met with, as well as the participants themselves. Consequently, other denominations, especially the Pentecostals, have greatly influenced Catholic Christians to leave the Church and join them.

During our meeting with the bishop and Msgr. Elizeo Ovure, vicar for refugees and migrants in the Arua Diocese, we discussed a number of the challenges facing the refugees and possible strategies to help them. The Arua Diocese accommodates up to one million refugees. Due to the huge number of people, the vast distances, and the few priests available, some camps go up to three months without a priest. The bishop said, “For this reason, the much-needed spiritual contribution of Emmaus Center Katikamu to support the refugee camps is timely.”

The bishop pledged his support of us for as long as it is needed and delegated Msgr. Ovure to assist us in future outreaches in the camps. He also gave us his apostolic blessing.

Our teachings focused on sin and its consequences: spiritually, socially, psychologically, and economically. We also looked at the value and impact of sacraments in our Christian life. And perhaps most importantly, we taught on the importance of receiving and giving forgiveness to our enemies, as lack of forgiveness destroys us both emotionally and physically. We emphasized reconciliation and the Eucharist.

Only a day before our program on forgiveness and reconciliation, some rebels crossed from South Sudan and raided the refugees’ cows. The participants’ pain was still fresh, and they wondered whether we were serious when we taught them to forgive their enemies! In the camps, it is common to find that tribes cannot share freely with each other. Fights are common when warring tribes meet. The wounds are so deep that when we started to talk about the need to forgive and bless our enemies, some people cried, some felt like walking out of the hall, and others kept deep silence.

We strongly felt that the best way to handle this situation was to take participants to the chapel where the Blessed Sacrament was exposed. Indeed, Jesus took charge during the session of prayer, as participants were led to release forgiveness to those who had caused atrocities and hurts to them individually, to their families, or to their loved ones. During the service, representatives of different tribes released forgiveness to one another. This was a very moving day of our program. After the exercise, the Holy Spirit released great joy among the participants, which was eminent on their faces. They were able to hug one another and dance together.

We also dealt with the healing of painful emotions and feelings because of past inner wounds. They affect us psychologically and physically, and they influence and shape our behavior and character. One evening, we had another ministry to heal inner wounds before the Blessed Sacrament. Participants poured out their painful memories to the Lord in tears. Facilitators were available to pray with participants individually, and this took us a long time, as we didn’t want to hurry them in processing their painful feelings.

Toward the end of the conference, we taught participants basic skills on leadership and how to pray for the situations in their country. We discussed the power of the Holy Spirit and how to pray in the power and guidance of the Holy Spirit. Prior to the conference, the Emmaus Community prayed for a month for southern Sudan and those trapped in the camps. It was edifying for us to see the answers to our prayers for peace. The participants were so happy and asked us to go back to the camp to reach out to many of their brothers and sisters.

The participants are eager to see us build on the foundations that were laid. They pleaded with us to not leave them orphans but to go to them regularly to re-enkindle the fire of God’s love.