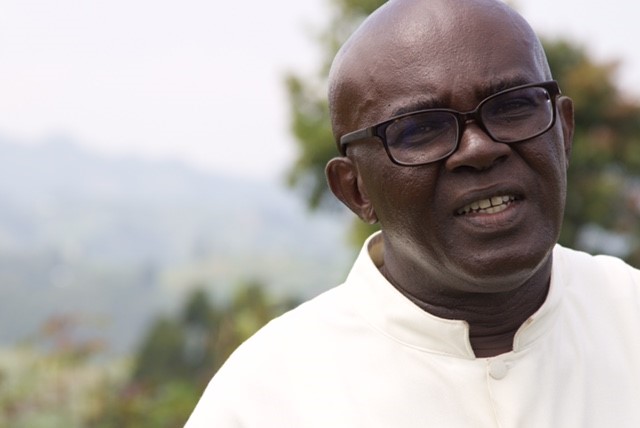 Fr. Ubald Rugirangoga will be at guest at this year’s Gathering.

By Lloyd Greenhaw and Katsey Long

Our time in Rwanda with an amazing and gifted team was very rich, but one especially beautiful fruit to come of our time there was our relationship with Fr. Ubald Rugirangoga, who you can learn more about at www.frubald.com.

One of our team members, Katsey Long, is a social worker who is in the midst of filming a documentary on Fr. Ubald. For the past eight years, she has spent her time between Rwanda and the US.

Fr. Ubald has a harrowing story from the Rwandan genocide. He was a participant in our first Unbound training sessions in Rwanda and found freedom in Christ. His story, from Katsey, follows:

During the genocide, Fr. Ubald was pastor of a parish. He had hired guards and was trying to protect his 45,000 parishioners, when the mayor and the district leaders suggested he leave. They told him they wouldn’t hurt anybody if he left. This was in May, and genocide had been going on for a little while. Fr. Ubald called his bishop, who came to get him.

When it was time for him to leave, the people formed an aisle for him, and he walked through the pathway out to the car. Everyone was sobbing, because they knew they were going to die after he left, so the bishop said he would stay with them that night.

The bishop left the next day, and within two days, they started killing everyone. About 45,000 people died within three days. At the time, Fr. Ubald wanted to die; he wanted to go back with his people and die with them. He was devastated at what happened and that he had trusted the leadership.

Fr. Ubald stayed at the bishop’s house for about three weeks. After that, he got a phone call from a friend who warned him about plans to kill him. “They will put your head on a stake and process it through the parish so everyone will know you have no power,” they said. He decided to escape.

Fr. Ubald took the money he had and paid for five other people to escape with him. One of them, a priest, did not make the rendezvous point and was killed in the genocide. The rest of them escaped in the middle of the night to the Congo. Once he got there, Fr. Ubald continued on to Lourdes, France, where people paid for him to come to find healing.

In fact, he was healed at Lourdes. While going up the hill during Stations of the Cross, a priest said, “Jesus accepted His cross,” and Fr. Ubald heard a voice say, “Ubald pick up your cross, the genocide is your cross.”  Once he accepted it as his cross, Fr. Ubald stopped crying. When he returned to Rwanda in January of 1995, he started preaching forgiveness, because he knew forgiveness is the only way.

At that time people, did not want to hear the message of forgiveness, but Fr. Ubald continued to preach it and to visit the prisons of Rwanda to tell the perpetrators to ask for pardon for what they had done. One day, he was preaching in a prison, when a man came up to him and said, “I need to ask something of you Fr. Ubald. I was the one that ordered your mother to be killed, and I would like to ask for your forgiveness.”

Fr. Ubald wept, then went over and hugged the man and said, “In the name of Jesus, I forgive you.” Then, on his way home, he was thinking, “I wonder if that man really believes that I have forgiven him?” He decided he wanted to do something to prove his forgiveness.

Later that day, Fr. Ubald received a call telling him the man’s children were now basically orphans. The mother had died, and since the father was imprisoned and could not pay the school fees, they were kicked out of school. Fr. Ubald adopted both of those children. He continues to help them as they grow up and try to make a life for themselves. One of them is at medical school, and he continues to pay her educational expenses. The father will get out of prison next year, and Fr. Ubald will help him find a way to make a living and to help people. He continues to preach that message all over the country.

At Fr. Ubald’s healing services, it is not uncommon for there to be 30,000 people, and when he does them at a place like Kigali’s Maharo Stadium, 80,000 people will come to hear him preach about forgiveness and reconciliation, and he sees many, many healings: physical, emotional, trauma, cancer, HIV, bones healed, lame walk, blind see. However, he considers the greatest miracle when someone chooses to forgive and to be free. His services are not just for Catholics but for everybody, including Muslims and Pentecostals. He also comes to the United States twice a year. 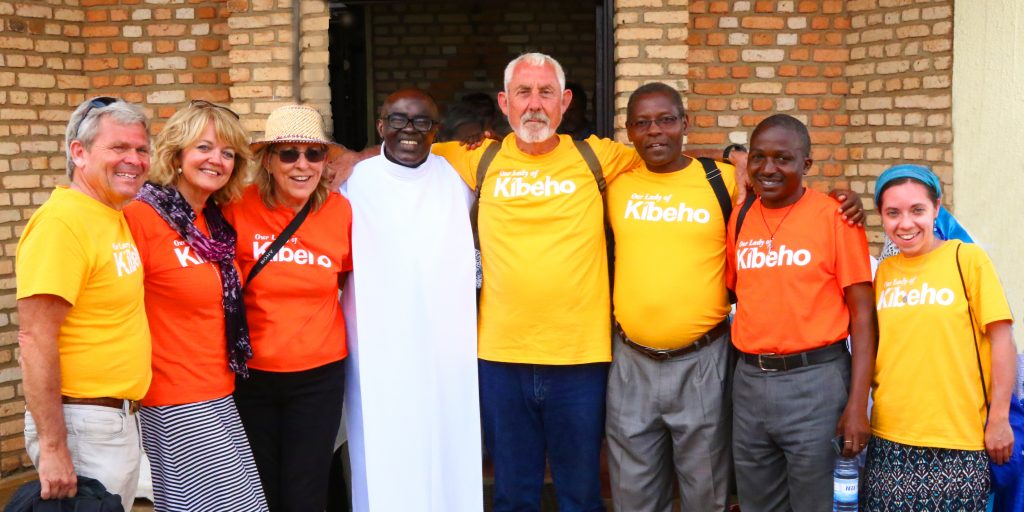 The Five Keys is an important part of Fr. Ubald’s work, and he learned it from one of Renewal Ministries’ earliest retreats in Rwanda. Prior to that, he had often done hands-on healing in small groups. He had told his bishop that people were coming back to him saying they had been healed. The bishop said, “That gift is not for you; that gift is for the world.” After five years of having a healing gift, the Lord gave Fr. Ubald the gift of the word of knowledge. He continued to pray faithfully that God would heal, and He did. And then, five years he got the word of knowledge gift, he learned the Five Keys from Renewal Ministries. With that knowledge, and with the experience of processing with a monstrance amidst a huge crowd at Lloyd Greenhaw’s request, he found the confidence to start to do healing services on a large scale.

With the help of donors, he has since purchased land on the shore of Lake Kisu for large missions—200,000 people can attend events there. A huge statue of Divine Mercy overlooks the venue. Fr. Ubald also has started a center for forgiveness and reconciliation here, called The Center for the Secret of Peace.  He brings together perpetrators and victims to participate together in the process of reconciliation.

People reaching out to touch the Divine Mercy statue.