Ralph Martin wrote the following report from India, where he has been for about three weeks, speaking extensively and serving with his wife Anne, Deacon Dan and Dolly Foley, Fr. Chas Canoy, John and Michelle Kazanjian, and Erin Campbell. This is the second in a three-part series about the mission. (Part one can be found here.) Anne Martin already has provided two reports about the mission, which can be found here and here. 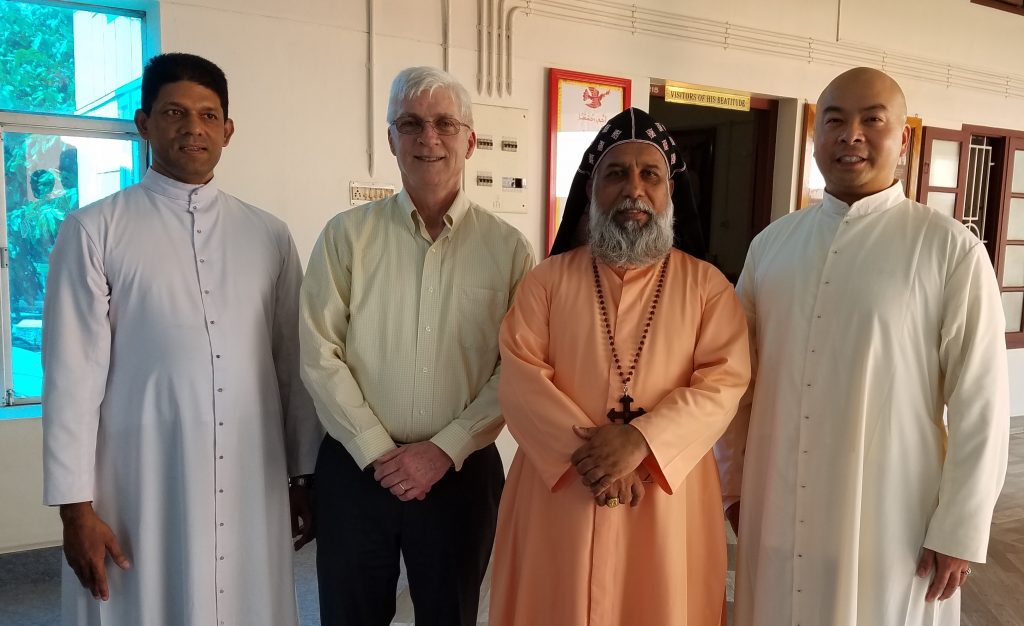 Dear Partners in the Mission,

As you read this, we are probably recovering from last night’s late arrival into the US after more than twenty-four hours of travel—always a happy occasion, despite how good the mission was. Below, I will continue the second part of my report on our mission to India.

On the afternoon of Jan. 11, we flew to Trivandrum, in the far south of India, in the state of Kerala, which is the “heartland” of the Catholic Church in India. Christians make up about twenty percent of the population of Kerala and run many highly regarded schools, hospitals, and universities. There is a different atmosphere here and many open signs of Catholic presence and faith.

Fr. Matthew George picked us up at the airport; he served in the US for a number of years and was one of the first graduates from the STL program at Sacred Heart Major Seminary, which focuses on evangelization. At this point, Fr. Chas Canoy, a pastor of a parish in Jackson, Michigan, also arrived to help us with the upcoming week-long retreat for priests in Pune.

We learned that Cardinal Cleemis, whom Anne and I met in Rome when I was studying there and again during the Synod on Evangelization, where it was announced that Pope Benedict XVI had appointed him a cardinal, invited our whole team to stay with him at his episcopal residence. Cardinal Cleemis is head of the Syro-Malankara Church, and also has just been re-elected to his second term as president of the entire Indian Catholic Bishops’ Conference. The cardinal had decided to schedule an annual theological colloquium during the time I was in India, so that I could present a paper at it. Almost all of the seminarians in his diocese, about one hundred, and some of the leading theologians of India, were there. I was able to present a paper on the urgent question about whether it is still important to evangelize, given the fact that it is sometimes possible for someone to be saved even if they haven’t heard the Gospel. You know my answer to that question: Absolutely! People’s salvations are at stake!

After two nights in Trivandum, we got up very early and left at 5:15 a.m. for the train station, where we found a big crowd of Indians getting morning trains to various destinations. We boarded a train for Kochi (Cochin)—a trip that took about four hours. At this point, it became apparent that I was having some stomach issues. However, upon arrival in Cochin, I was told that a big crowd of 500 priests, nuns, and lay leaders were waiting for me, and they asked if I could come immediately to the auditorium. I begged for a few minutes to go to my room first and “freshen up.” I wasn’t sure I could continue, and I asked Fr. Chas and Deacon Dan if they could be ready to do the first talk, in case I wasn’t able to.

When I mentioned this to the organizers who were hosting us, the way in which they expressed their disappointment told me I had to go on and do both talks, trusting the Lord that it would be possible. It was. I am very grateful to God and for your prayers for supporting me through this whole mission, but especially for getting me through that particular day. Our host at the pastoral center in Ernakulum (the “new city” area of Cochin) was Fr. Varghese Vallikatt, another graduate of our STL program at the seminary and now the deputy director of the Kerala Bishops’ Conference—he serves as the primary executive for coordinating the work of all three rites in Kerala, he himself a Syro-Malankara, as well as for the Syro-Malabar, and Latin Rite bishops. 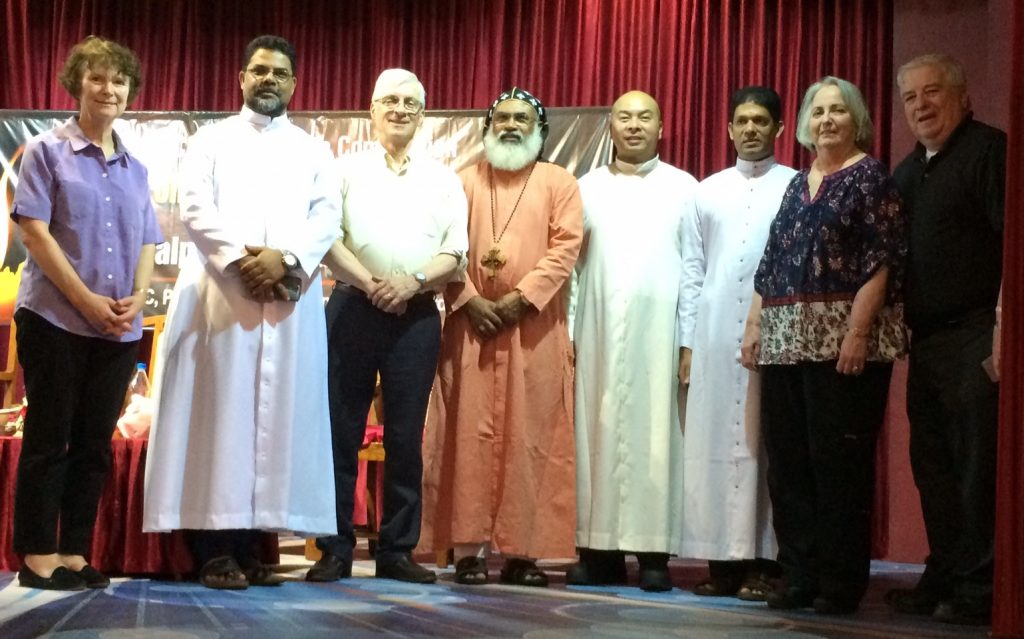 Archbishop Koriloos, the archbishop of Tiruvalla, hosted the gathering and greeted me on the stage with a special honorary garland made up of cardamon seeds and orange cloth. Together, the archbishop and our team lit the devotional oil lamps, and I gave two talks, one on evangelization and one on the new Pentecost. Later that afternoon, we met with about forty key lay leaders, who told us absolutely amazing stories of how they are evangelizing. One couple, who are leaders in one of the movements, told how they have 250 laypeople working full time as missionaries throughout India, depending on the Lord for their support. If they are short on funds, they fast for three days, and the Lord provides!

The leader of the Catholic Charismatic Renewal in Kerala told us they have 3,000 prayer groups! He himself travels as an evangelist all over the world. Another woman told us of her ministry to professionals in the work force. Someone else told us of their amazing ministry to children; they have trained over 300 counselor/evangelists that work in camps for children all over India and in other countries as well. Someone else told of their successful efforts to get the Bible translated into sixteen Indian languages that had never had the Scripture before. We were all “blown away” by the zeal, courage, and dedication of these brothers and sisters.

And then, unexpectedly, that same night I was invited to address all thirteen Latin Rite bishops, who were meeting at that time on a topic related to marriage and family life. Bishop Sebastian, who was a priest at the wedding of my niece, Mary Hope Morris Rennie—Fr. Jonathan Morris’ sister—heard that I was in India, so he asked the other bishops if he could invite me to address them. And so I did! God gave me amazing strength that day that began with wondering if I could go on or not.

Stay tuned for the final installment in Ralph’s report from India!