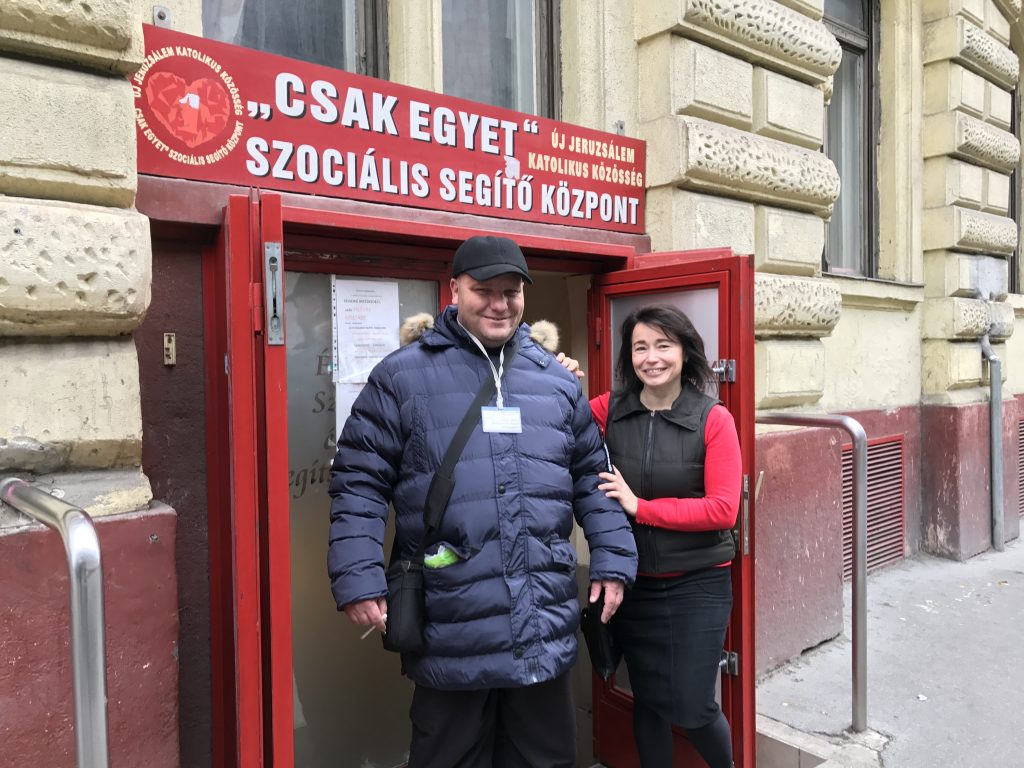 Renewal Ministries’ Missions Administrator Kathleen Kittle recently served on mission in Hungary. You can read the full report here. During her time in Hungary, Kathleen spent a day with Country Coordinator Deacon Zoli Kunszabo’s wife, Panni, shown above at the Only One homeless day shelter. Below, Panni shares more about the Only One shelter, the mission behind it, and the people it serves. You can read more about Only One at its website, here.

A real home means loving relationships, something we only experience in fragments until we reach our true home with the heavenly Father. We were created for this heavenly home, and we long for it after we arrive on earth as miserable little people. That is to say, we desire the presence of God. When we understand with our hearts what great love and acceptance our Creator has for us, we want to share this with others, especially those who are true beggars in this earthly home—those for whom no one cares, worries, cries, or mourns.

I talk of nobody’s children, individuals who belong to no one, who have no family with caring wings to cover them. At Only One, we lead and offer these people to God’s care. This is our vocation.

The people we care for do not know how to love, as they have not yet experienced it. The world expects them to live healthy, normal lives, but it is impossible for them. Their hearts bleed from open wounds—the pain of which they try to dull with drugs, alcohol, and periodic unhealthy relationships. These wounds then produce sins and thus more wounds.

In our little daytime center, we beg for the love of the merciful God to fill our hardened hearts so that, with them, we may love our starving guests. As we provide them food and clothing, and try to find them accommodation and work, we try to love them—for we can do nothing else. This is, after all, the only thing that makes sense in the end.[1]

We are open every work day in order that those who beg, or who live in shelters, on the street, or in poor unheated flats, can visit and be at home, can tell us what happened to them, can cry. We opened our doors seven years ago and since then, many thousands have honoured us with their life stories, often talking for hours, finally finding someone who listens. There were days when four hundred people visited us, other times one hundred. Nonetheless, we try to treat everyone as an individual and speak to the one before us as the most important one at that moment. I will share some of their stories below:

These are some of the guests we greet every day.

We believe that God knows the horrific depths of the suffering these people have been through. We believe they, too, have been redeemed and are loved, even when to  human eyes they seem unlovable because of their behaviour and appearance.

We believe that we, too, have been brought out of our sins, from our own depths and misery, and we are witnesses to God’s desire to deliver us all.

There are times when we see the success of our ministry, when before our eyes someone who was once frightening becomes meek and mild and even becomes a daily volunteer and helper; when a drug-addicted Gypsy man becomes an irreplaceable colleague who returns every weekend to his place of birth, to give witness to the endless love of God. We know a young orphan of twenty who arrived the day we opened. He had already been in prison three times for burglary and had no home to return to, but when he came to our day centre, he said “yes” to the invitation of God and changed his life. Tom has had work for five years now, rents an apartment, is not homeless because he found a family in us.

We do not always see the fruits of our labour; our “only” task is to be together with our guests. We try to show them some of God’s merciful love until they arrive at their true home, the one prepared for all of us and where we all strive to arrive.

[1] “On coming into the world, man is not equipped with everything he needs for developing his bodily and spiritual life. He needs others. Differences appear tied to age, physical abilities, intellectual or moral aptitudes, the benefits derived from social commerce, and the distribution of wealth. The ‘talents’ are not distributed equally.  These differences belong to God’s plan, who wills that each receive what he needs from others, and that those endowed with particular ‘talents’ share the benefits with those who need them. These differences encourage and often oblige persons to practice generosity, kindness, and sharing of goods; they foster the mutual enrichment of cultures.” (Catechism of the Catholic Church, 2nd ed., 1936-1937.)