Spreading the Gospel in Rwanda 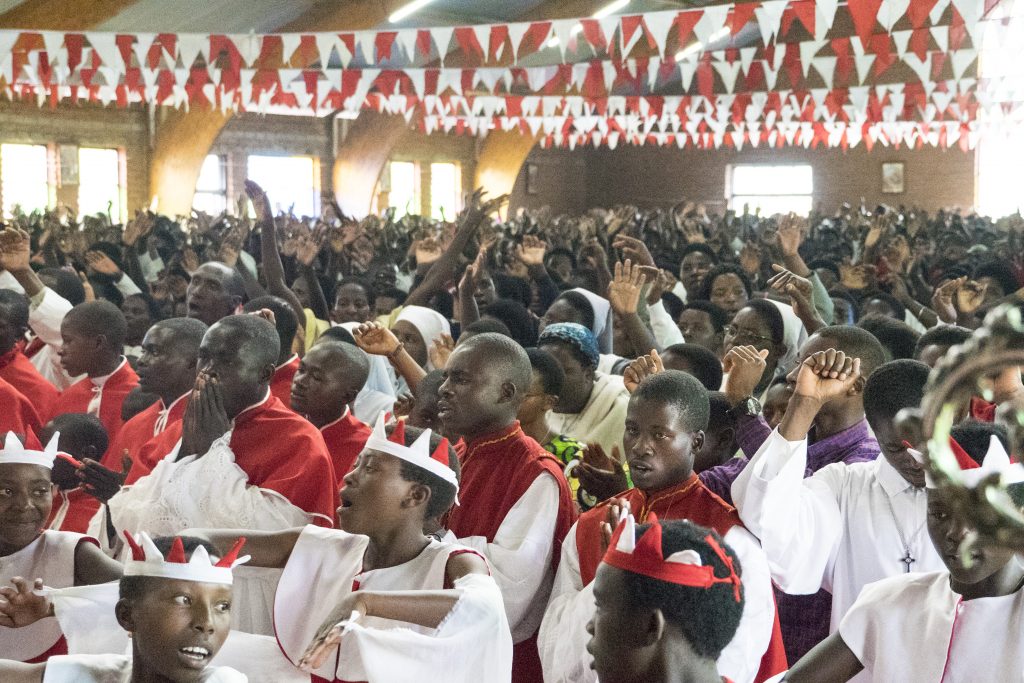 Our mission in Rwanda began with a week of teaching Charismatic leaders, including three priests, from all of Rwanda’s nine dioceses. The participants were very involved and asked many questions that revealed their understanding and insight. Lloyd explained that the Five Keys—a method of finding freedom in Christ by renouncing sin and claiming the Lord’s authority over one’s life—are a lifestyle that has the goal of not just being set free, but of moving closer to Jesus. As our trust grew throughout the week, participants began asking for individual prayer.

One religious sister experienced freedom during our prayer session, and she asked if we would also pray with her brother. He was an older gentleman who could only walk with help from his daughters, was confused, and fell a lot. He had been that way for six months—ever since his daughters had taken him to a witch doctor. He was clearly agitated that we were there, and he did not want to have anything to do with us. The more we prayed, the more agitated he became—but the Lord was doing things. Every once in a while, he would jerk around and look at me as I stood behind him and prayed. It was obvious he felt things leaving him, and each time, he was startled. I think this ongoing freedom came because he had given his daughters permission to bring him for prayer, and they had given us permission to pray for him. Lloyd asked him to say the name of Jesus, but he would not do it; however, after a while, he was more coherent and logical in answering questions.

Nevertheless, he would not forgive his daughters for taking him to the witch doctor. He also wouldn’t say Jesus’ name. So we ended the session; he was in better condition than when we had started, but he was not set free. That was Thursday. On Friday evening, we had Mass, and our friend who is the bishop emeritus of the Kibungo Diocese came to be with us and the participants.

We were sitting in the back of the small chapel when the religious sister and her nieces brought in the man who we had prayed for the day before. His daughters sat on each side of him. At one point in the Mass, he tried to leave, but they would not let him. That morning, he had asked his sister, “Why did you let those white people take those things from me?” He knew something was gone, but he did not know what. He refused Communion. (Later, we found out he’s been married three times, so perhaps he knew he wasn’t allowed to receive the Eucharist.)

After Mass, we adored Jesus on the altar. Then the bishop invited everyone up to the altar in a half circle. The man’s daughters brought him up to be included. Everyone was kneeling except him, when the bishop brought Jesus around in a monstrance. The bishop had no idea that we had prayed with this man. He stopped with the Blessed Sacrament right in front of him and lowered the Blessed Sacrament to his face. The man looked up, and very gently, very gracefully, got onto his knees to adore the Lord! We were amazed.

After Jesus was put into the tabernacle, the man’s sister sobbed on my shoulder and his daughters were elated. God is good! I went up to him to shake his hand, and he did it with no problem, which was totally different from the day before. We were all blessed and had our faith built up to see the power of our Eucharistic Lord!

We then traveled to the Diocese of Ruhengeri for the grand opening of a new Charismatic Healing Center that was inspired by the teaching we shared there several years ago with Neal Lozano. It was also the fiftieth anniversary celebration of the Catholic Charismatic Renewal in Rwanda. When we arrived at the medium-sized church, it had rained and was very muddy, but that didn’t stop the crowd! People were jammed in every square inch and spilling out of every door. Even the tiny priest’s changing room was filled with people! I estimate there were 5,000 people in attendance. They had many beautiful and lively dance groups accompanied by choirs, and at least three bishops were in attendance.

Charismatic Renewal Leader Sylvester Dukuzumuremyi spoke about how the community starting in 2009 in order to help people come out of bondage into freedom, using the Five Keys’ model. He said the place is for all who need Jesus. It was completely built and paid for by the Charismatics. They actually made each of the bricks by hand!

Lloyd said he had never seen anything like what they achieved by their unity of purpose and that the bishops’ presence showed they were working in the heart of the Church. He challenged them to fulfill their destiny in making disciples for the Lord and to not let petty differences and jealousy break the beautiful bond and unity they now had. I told them that there is nothing like this place in the Unites States; there is nothing like it in the entire world!

Our Blessed Mother at Mass

We were not able to go to Kibeho, due to our guide’s illness and strict government regulations that would have significantly lengthened our trip. I felt badly that we chose not to go, until I read a book by Catalina Rivas of Bolivia, who is said to receive messages from Jesus, Mary, and the angels. She has the approval of Bishop René Fernández Apaza. The following text is from a reproduction of a booklet The Holy Mass, in which Our Lord and Our Lady explain what is happening during the Mass. Mary says,

It surprises you to see Me standing a little behind Monsignor [the Archbishop], does it not? This is how it should be . . . With all the love that My Son gives Me, He has not given Me the dignity that He has given the priests of being able to perform the daily Miracle with My hands as they do with their priestly hands. Because of this, I feel a deep respect for priests and for the miracle that God carries out through them, which compels Me to kneel here behind them.

My God, how much dignity, how much grace the Lord pours over the priestly souls, and neither we, nor perhaps some of them, are conscious of this.

This reminds me again that Mary is with us at Mass, as well as at any apparition sites! The Lord in His mercy knows that few have the money and time to travel around the world, so He gives them something better at every Mass! This gives me peace and challenges me to seek a deeper faith in the Eucharist.

Once again, I know that Renewal Ministries has made a difference in the lives of many. Hearing the many testimonies of freedom and seeing the huge new complex dedicated to evangelization through the Five Keys was confirmation that what we have been doing is not in vain. Thanks for the opportunity to serve!