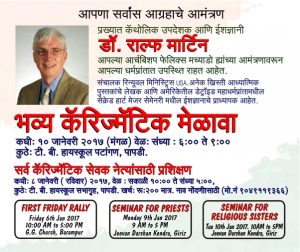 Banners like this one, in the Marathai language, are displayed in all forty parishes in one Indian diocese. 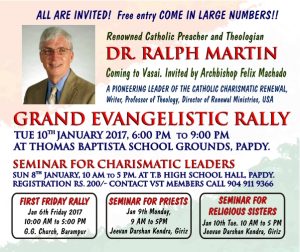 This is the English translation of the banner that is on display in forty Indian parishes.

Dear Partners in the Gospel,

Your support is making possible a really significant mission to India, beginning today. We have our visas, we have our inoculations against typhoid and Hepatitis A, and we are taking our malaria pills. As you read this, a small team and I are on our way to the airport, getting ready to fly to India, where Renewal Ministries has been invited by four Indian dioceses to provide training and encouragement for their priests, nuns, and lay leaders, as well as to conduct large rallies. I will even deliver a theological paper at an academic colloquium.

One of the archbishops who invited us has confided to us that he is very concerned about the condition of his priests and is grateful for our service. The Church in India has been, in many places, badly affected by pressure from the dominant Hinduism into a sometimes watered-down approach to proclaiming the true identity of Jesus and His call to all people everywhere to believe, repent, and be baptized.

From January 6 (yes, it will take us two days to get there!) to January 12, we will be in the diocese of Vasai, just North of Mumbai (the former Bombay). From January 12-15, we will be in the far South of India, in the State of Kerala, in the dioceses of Trivandrum and Tiruvalla. We have been invited to Trivandrum by Cardinal Cleemis, who is the current president of the Indian Bishops’ Conference. We have been invited to Tiruvalla by Archbishop Koriloos, who has visited us here in Michigan and also in Rome, and who arranged for The Fulfillment of All Desire to be translated into Malayalam, the dominant local language. Then we move by plane, train, and automobile, back to the central region of India, to the Diocese of Poona, in the city of Pune, where we will be until January 23.

My wife Anne is going with me, as is Renewal Ministries’ Board Chairman Deacon Dan Foley and his wife Dolly, whose daughter married a young man from Pune. This whole mission began with their wedding in Pune, which sparked the invitation to the Diocese of Pune. Then, former Indian students from the seminary and friends from previous visits to India heard we were going to be there, and a mission to one diocese evolved into a mission to four dioceses!

John and Michelle Kazanjian also will join us in Pune, for the week-long priests’ retreat and sisters’ retreat; they will lead prayer for deliverance from various bondages using the “five keys” of the Unbound method developed by our good friend Neal Lozano. Anne and Dolly (who are coming at our personal expense) will help them pray for people. Fr. Chas Canoy will join us in the south and in Pune, to help minister to the priests. He is the pastor of a parish in Jackson, Michigan, and a Sacred Heart Major Seminary graduate.

As time permits—every day is scheduled!—I will be sending “reports from the field” to let you know how things are going, hopefully along with some photos.

Thank you for your support, and please include us in your prayers during this time!