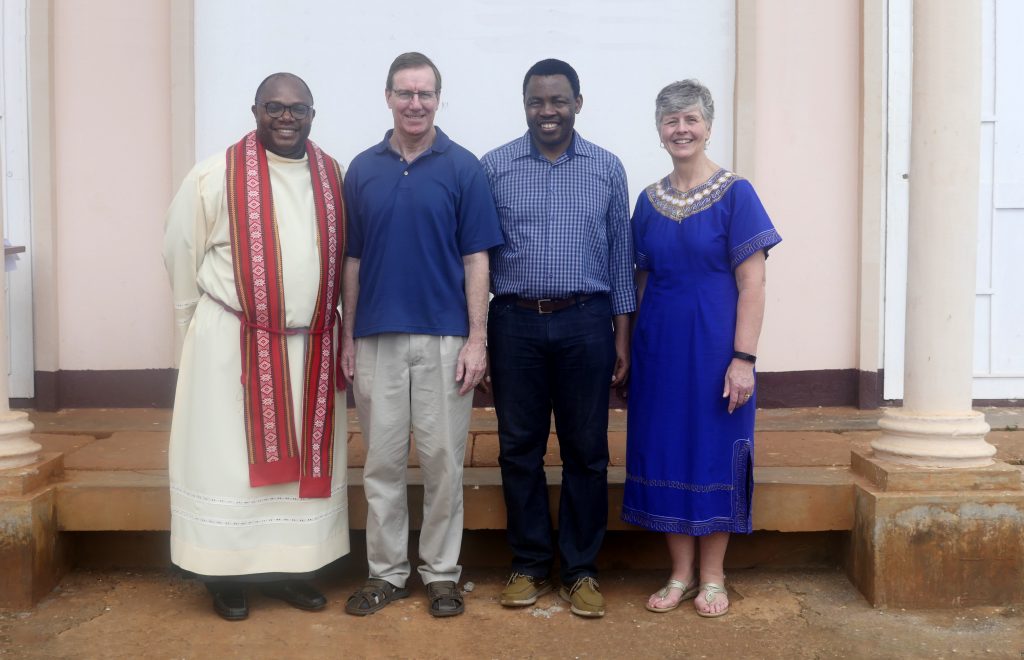 When Fr. Jude Thaddeus Langeh, CMF, invited Renewal Ministries’ Country Coordinator Peter Newburn and Board Member Miriam Wright to do Unbound ministry and training in Cameroon, he did not know how their ministry would transform his own life. Unbound is a method of deliverance healing that utilizes the five keys of repentance and faith, forgiveness, renunciation, authority, and the Father’s blessing. Fr. Jude extended the invitation to Renewal Ministries in August of 2018, and that November, he was the victim of a kidnapping, along with two other Claretians and their driver. His story is below.

Fr. Jude met Peter Newburn in 2015, when Peter and his family were serving as missionaries in Cameroon. They became friends, and even saw each other in the US during one of Fr. Jude’s travels. Fr. Jude had been introduced to the book Unbound, and he “read it from cover to cover.” Peter—who Fr. Jude said introduced Unbound to Cameroon—told Fr. Jude that Unbound is the method of deliverance used by Renewal Ministries. He also helped Fr. Jude get in contact with the book’s author, Neal Lozano. Through that connection, the Claretians were able to help make a low-cost edition of Unbound available in Cameroon.

“I understood it to be a very great healing process that we could apply in our situation in Cameroon,” said Fr. Jude. “It is important, because the five keys are so easy, clear, and great to follow. Within one week or less, you can be drilled through the Five Keys, which is an effective means for personal healing and has the capacity to help others. Unbound exposed me to my vices, helped me to come out of them, and I thought it would be an effective tool to help others.” Fr. Jude added that his experience with Unbound since his kidnapping is a great testament to its ability to help other people in his country as well.

According to Peter Newburn, “about twenty percent of Cameroon is English-speaking, and for the past two-and-a-half years, there has been an increasing clamoring for independence. Leaders of the insurgence, called the ‘Amba Boys,’ have promoted chaos and instability in hopes of garnering change. The predominately French-speaking government has responded forcefully, at times with indiscriminate violence. Many people have been killed.”

It was in this political climate that Fr. Jude and his companions were kidnapped. At the time, they were travelling to a Claretian parish in an Anglophone area of Cameroon to provide basic food, medication, supplies, and moral support to the parishioners and priest, who were hiding in the bush due to the unrest.

“I was so surprised,” said Fr. Jude. “When they kidnapped us, they said, ‘The Church needs to speak. It has not made a good statement about the Cameroonian president.’ They wanted to speak to the pope. However, since we lived on the other side of Cameroon, they also thought we were government spies.”

Fr. Jude shared the details of his captivity:

“From Nov. 23-29, we were kidnapped. We were tortured. They used very bad words and insults. They thought we were military people. They used machetes to cut our bodies, legs, and beat us. The used the under part of their guns to beat us on every part of our bodies. They made us look at the sun continuously for three hours. They made us go without clothes.

“The first thing I experienced was that, humanly speaking, I was afraid of dying. I thought, ‘Oh my goodness, we’re not going to survive.’ I was crying. It was really hard. We said, ‘Oh, God! When Paul and Silas were captured, they prayed, and You rescued them.’

“Any time we wanted to pray, they let us. The more we prayed, the more the days went on, the greater we were tortured. Finally, God heard our prayer, and one day, we were set free.

“There were so many praying for us and looking for us. One day, our captors just took us out and told us, ‘We are going to keep your driver, and you need to go and bring us money.’ They asked us for a ransom for the driver. As priests, our policy is that we don’t pay ransoms. But we got support from friends, because we couldn’t leave the driver there. He was in captivity for two more weeks, and then he was released. They suspected the driver was a military man, so they kept on torturing him until one of them identified him and said that he was not military.”

After their release, Fr. Jude, his fellow Claretians, and the driver were all hospitalized and received psychotherapy to help them recover from the trauma of the kidnapping and torture. They also received letters and emails from Pope Francis, who had been informed of their situation by the Claretian general superior in Rome. The pope “expressed his closeness to us in this situation,” said Fr. Jude, who added that this “feeling of closeness of the pope” was a great help after the kidnapping.

Unbound ministry also played a significant role in Fr. Jude’s healing. He believes the fact that the Unbound ministry was scheduled before his kidnapping—and then took place shortly afterward, when he could most benefit from it—shows that “God was with us, and God had a plan for it.”

When asked how the kidnapping affected his faith, Fr. Jude answered:

“All of the events that have happened since the kidnapping show that God allowed it for a purpose. During the Unbound prayer, someone shared with me the revelation that God had a plan for me. Everyone said, ‘God kept you there for a purpose.’ For me, it has been a faith-growing experience. I’ve got to understand that before every Easter Sunday, there is a Good Friday. My faith hasn’t just grown; I’ve gone through a leap of faith.

“God arranged the events so that everything fell within that period. The kidnapping experience was not just physical. They also used fetishes—magical things—within the camp, things like witchcraft, as a way of protecting themselves against the military bullets. They believed that would make the bullets not touch them. Additionally, these people took a lot of drugs. We needed physical, psychological, and spiritual freedom.

“Peter Newburn and Miriam Wright took me through the Five Keys of Unbound and prayed with me. God kept revealing there is a plan.

“As we went through the Five Keys, we were able to forgive. I thought I had forgiven, but any time I heard that one of my captors had died, I was thankful. With Unbound, I was able to more fully forgive. I found freedom from the kidnapping and other things from my whole life—situations in which I needed to forgive people, to accept Christ, and accept the freedom He offers.”

While Miriam was praying with Fr. Jude, she had a vision of Jesus being stripped naked (which is another suffering that Fr. Jude and his companions went through), with the very cloak of Jesus being given to Fr. Jude. In fact, he was named superior of the Claretians of Cameroon.

He explained, “I never expected that. I thought, ‘Should I accept? Should I refuse?’ Many people had prayed for me and told me, ‘Your kidnapping is preparing you for something.’ And with Miriam’s vision, I know it is from God. I’m convinced God gave me this responsibility. It’s very challenging, but I’m not afraid, because God will never give you something you can’t carry. He will give me all the support needed. One of my supports is the Unbound training through Miriam and Peter.”

Fr. Jude saw his own suffering bear fruit in his role as superior, when two Claretians were kidnapped in August. He said his experiences helped him know what to do, and how to best help the men once they were rescued.

“God sent me there to get experience to be able to help others,” he added.

Now, since the training with Peter and Miriam, Fr. Jude said that he has many people asking for more of Unbound: “They say we need more—come again! So we want to offer it as many times as possible, to everybody possible. It’s a great innovation, and we want more of Unbound. We want more Christ! We want to be liberated! Please come again! We need a lot of prayer for Cameroon, that peace and justice will have reign, so we can enjoy the benefits of living in a peaceful and just country.”

“I think we were blessed,” concluded Fr. Jude. “I am so grateful to Unbound. I wish to talk to those reading: Do not be discouraged when you go through suffering, especially when you go through persecution for the sake of Christ, as the Beatitudes tell us. We were persecuted for giving food to the hungry. At times, I felt like God was far away, but my experience shows that God is never far from us. My faith is strengthened. I have found freedom in Christ. God is never far from us. He is ready to free us in every situation.”