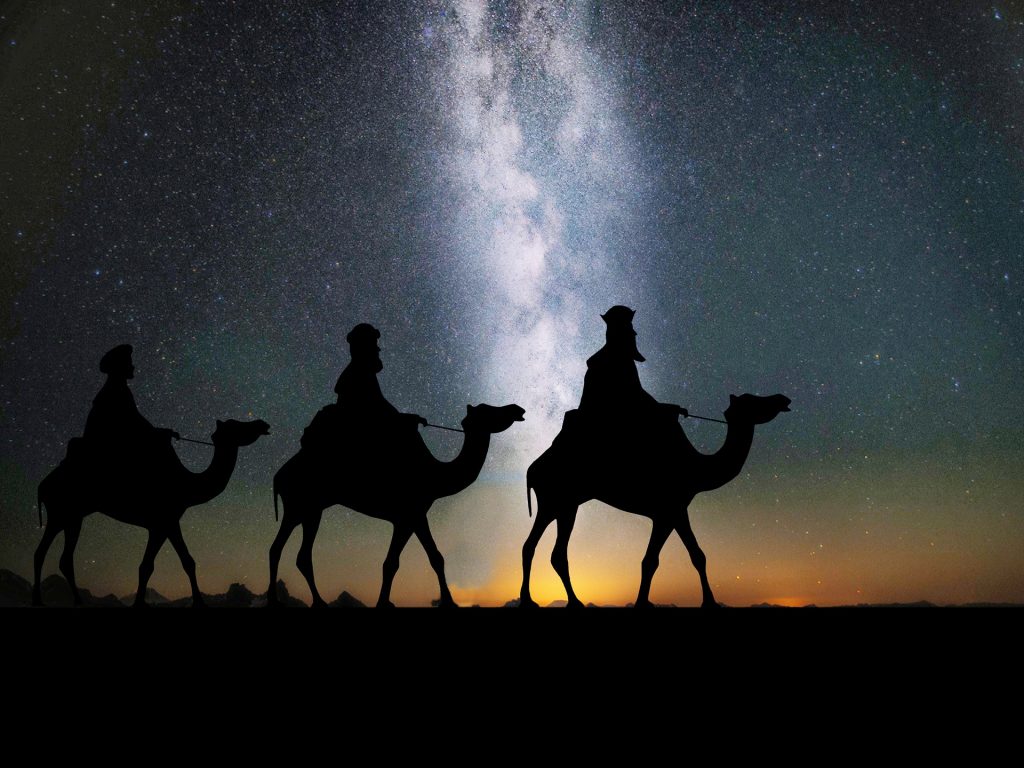 I’ve been doing a fresh study on the Wise Men who brought gifts to the child Jesus. Much of what we are led to believe about them has little basis in fact. Rather, they are usually portrayed according to what artists, Christmas card writers, and the makers of Crèche sets fancied them to be. All that we know with certainty about their origin is recorded in Matthew 2:1-2: “When Jesus was born in Bethlehem of Judea, in the days of King Herod, behold, magi from the east arrived in Jerusalem, saying, “Where is the newborn king of the Jews? We saw his star at its rising and have come to do him homage.”

Some Old Testament passages, as well as studies of other ancient writings, may give us insight into who these men were and why they came to seek out the newborn King. It is a fact that the very word “Magi” is an untranslatable word that can be traced back to being the name of an ancient priestly tribe dating to the time of Abraham. The word Magi eventually became corrupted, so that in English, it became more associated with “magic” and “magicians.” Indeed, the priestly tribe of the Magi was occult in nature. They excelled in astronomy, a science, but with an admixture of astrology, forbidden religion. They were very wise and far beyond others in mathematics, agriculture, and architecture. Their wisdom was renowned, and they became the counselors of kings in the Babylonian, Medo-Persian, Greek, and even the Roman Empires. They were also able to practice the dark spirit arts, read dreams, foretell events, etc.

These Magi, magicians, were very powerful in the time of Nebuchadnezzar, the King of Babylon. One could not be a king without their approval. At that point in history, the Hebrew people were taken captive to Babylon and enslaved for seventy years. Some of the Hebrew lads were recognized as very clever, as well as uncompromisingly devout to their God. The most notable was Daniel, called a man with a “more excellent spirit.”

King Nebuchadnezzar had a terrifying dream and the “wise men” were called with the following results: “When the magicians, enchanters, Chaldeans, and diviners had come in, I related the dream before them; but none of them could tell me its meaning. Finally there came before me Daniel, whose name is Belteshazzar after the name of my god, and in whom is a spirit of the holy gods. I repeated the dream to him: ‘Belteshazzar, chief of the magicians, I know that a spirit of the holy gods is in you and no mystery is too difficult for you; this is the dream that I saw, tell me its meaning’” (Dan 4:4-6). Daniel was the one gifted to interpret this and other terrifying dreams. Ultimately, this would lead to the conversion of the king, who would bow the knee before the God of Israel. Note that Daniel was elevated to be the master over all the magicians and wise men. It only stands to reason that Daniel would school them in the Sacred Scriptures of his God. Some would be converted and their intense spirituality, knowledge, and ancient wisdom would be passed down. The Magi tribe, this priestly people, passed on the priesthood through heredity, much like the Levitical tribe of the Jews. Thus, they would be schooled as sensitive prophets awaiting the promised Messiah of Daniel and his people. When a sign in the sky was given, their spirits recognized the prompting of the Holy Spirit, and some launched out fully prepared to welcome the King of all Kings.

Matthew 2 goes on to tell us that King Herod was troubled when he learned that the Magi were inquiring about a new king. Remember, the Magi were known as “king makers.” Herod asked them about the precise time of the sighting of the star. He hypocritically feigns an intention to go and pay homage to this new king. Their answer results in his declaration to kill all the males born in the last two years in the Bethlehem region. The Magi once again see the star and are led to a home, not a stable. The Scripture tells us that Mary and the Child were there. If we dare to read between the lines, it seems that perhaps a couple of years have passed since the birth of Jesus. The Magi bow in humble adoration and present treasure of gold, frankincense, and myrrh. Much has been speculated about the symbolism of these gifts. Suffice it to say, the treasure certainly would have enabled the Holy Family to escape to Egypt and live until Herod’s death.

Matthew 2:11 tells us the Wise Men “offered” their gifts. The Greek word translated “offered” is the word “prospherō.” The New Testament speaks seven times of a religious offering—an offering of worship. These men were wise and powerful. They were among the most learned men on earth, sacrificing much to travel to this little house and bow down in adoration. There is much to learn from them about giving gifts. Their giving of things flowed out of their giving of self. That’s a necessary ingredient of true worship. God is Spirit, and those who worship Him worship in Spirit and truth.

As St. John Chrysostom tells us, “The rich man is not the one who has much, but the one who gives much. For what one gives away, he keeps for eternity.”