Prayer: An Art We Need to Learn 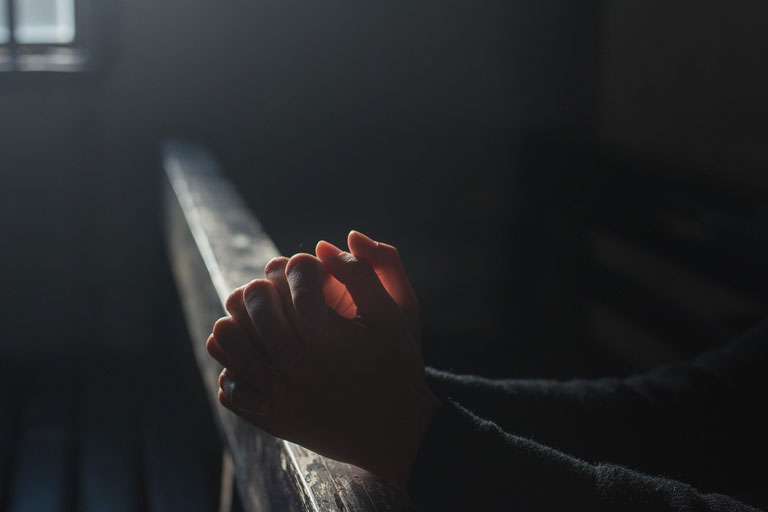 The following is an abridged version of the first of four talks on prayer Renewal Ministries’ Producer Jack Lynch recently gave for St. Thomas the Apostle Church in Ann Arbor, Michigan.

Prayer is for sinners like me, and presumably, like you. Jesus said, “I didn’t come to call the righteous, but sinners to repentance” (Lk 5:32).

I want to share three basic reasons for prayer:

For the Salvation of Souls

C.S. Lewis noted, “Humanity is like a drunk on a horse. He falls off one side, gets back up and falls off the other side.” Historically, we fall into two opposite sins:

Today, we’ve fallen off the horse on the presumption side. People think that since God loves us, virtually everyone goes to heaven. Jesus doesn’t say that. He says the way to heaven is difficult and the way to hell is easy (Mt 7:13).

Jesus let Himself be crucified to help us make the right choice. He tells us to “strive”—to make an agonizing effort—to enter through the narrow gate (Lk 13:24). Hebrews 12:14 says to “strive” for the holiness without which no one will see the Lord. John Paul II tells us, “Training in holiness calls for a Christian life distinguished above all in the art of prayer” (At the Beginning of the New Millennium, 32)—meaning, prayer is an art we need to learn.

Let’s begin by recovering an authentic fear of the Lord. Scripture exhorts us to fear the Lord: “Jesus offered up prayers and supplications, with loud cries and tears to Him who was able to save him from death, and he was heard for his godly fear” (Heb 5:7). Isn’t that stunning? Jesus was heard for his godly fear. There’s a holy, wholesome fear of the Lord that includes awesomeness and greatness, and which should help drive us to prayer, as it did Jesus in his humanity.

There’s gladness, rejoicing, goodness associated with fear of the Lord. Mary herself said, “His mercy reaches from age to age for those who fear him” (Lk 1:50). Receiving God’s mercy and having a healthy, wholesome fear of Him go hand in hand. It’s reverence and awe, but also a fear of offending Him because of the consequences. Jesus says, “If your hand causes you to sin, cut it off. It is better for you to enter life maimed than with two hands to go to hell to the unquenchable fire” (Mk 9:45).  He is saying we need to be ruthless with cutting sin out of our lives, starting with mortal sin.

It’s encouraging that some Corinthians were like that, but they were getting back on track.

In St. Faustina’s Diary, Jesus says repeatedly, “The greatest sinner has the greatest claim on my mercy.” He is rich in mercy, which people choose by turning from sin. If they do not, He explains, “Souls perish in spite of my bitter passion. I’m giving them the last hope of salvation, that is, the feast of my mercy. If they will not adore my mercy, they will perish for all eternity. Tell souls about this great mercy of mine, because the awful day, the day of my justice, is near.”

A healthy, wholesome fear of the Lord should drive us to prayer. Together with the Mass and the Sacraments, prayer is where we find the grace, the strength, the help we need to stay faithful to the Lord amidst life’s trials and temptations. As St. Augustine says, “If you pray well, you will live well. If you live well, you will die well. If you die well, all will be well.”

It’s important to learn to pray well. Jesus tells the apostles, “You should be awake, praying not to be put to the test” (Mt 26:40-41). The Catechism says, “‘Lead us not into temptation but deliver us from evil’ . . . such a battle and such a victory become possible only through prayer. It is by his prayer that Jesus vanquishes the tempter both at the onset of his public mission and at the ultimate struggle of his agony” (2849). Even Jesus won the victory through his own prayer. The Catechism adds, “Prayer is a vital necessity. If we do not allow the Spirit to lead us, we fall back into the slavery of sin” (2744).

How can the Holy Spirit be in our life if our heart is far from Him? The Catechism quotes St. Alphonsus: “Those who pray are certainly saved. Those who do not are certainly damned.” This reminds me of a quote from the great boxer Mohammad Ali. Someone once asked him how he won so often: “The victory is won far away from the lights and the crowd on the road—in the pain and solitude of preparation and discipline.”

Indeed, Jesus’ victory is won far from the crowd, in the Garden of Gesthemene, with his apostles falling asleep. We also need to enter the discipline, some of the pain, getting up early to pray, or setting aside something we’d rather do. That’s where victory is won—far from what people see in our active service.

The Catechism says, “By prayer, we can discern what is the will of God and obtain the endurance to do it” (2026). It’s important to discern the will of God because of this wake-up call from Jesus: “Not everyone who says to me ‘Lord, Lord’ will enter the kingdom of heaven, but he who does the will of my father who is in heaven” (Mt 7:21).

We need to aim for fervor, for deeper conversion, for wholehearted discipleship, for Jesus tells us, “How I wish you were hot or cold! But since you are lukewarm, I will spew you from my mouth” (Rv 3:16). Aim for the bullseye of being fervent for the Lord, but this doesn’t mean we will always feel fervent. At times we won’t feel fervor or experience his presence, but we should still obey God, wholeheartedly follow our duties, and pray.

God Longs for Us. He is Our Deepest Desire.

Our deepest desire is to be in union with God. The Catechism says, “Jesus thirsts. His asking arises from the depths of God’s desire for us. Whether we realize it or not, prayer is the encounter of God’s thirst with ours. God thirsts, that we may thirst for Him” (2560). That thought draws me to prayer.

Also, Jesus loves us with such tenderness! When Jesus approaches Jerusalem before the Last Supper, He knows it will be destroyed by the Romans. He weeps, “Jerusalem, Jerusalem, how often I would have gathered you to myself like a mother hen her chicks, and yet you refuse me” (Mt 23:37).

Psalm 63:2 says, “O God, you are my God whom I seek. For you my flesh pines and my soul thirsts like the earth, parched, lifeless, without water.” Some saints call this longing for this kind of union with God transforming union or spiritual marriage. They’re confident that by God’s grace we all can reach this union, which in fact is the Lord’s intention for us while we’re on earth, and even the pearl of great price for which we should all be striving.

St. John of the Cross gets so excited at one point in his writing, he cries out, “Souls! Created for such glories—what are you doing with your time?”

There are many things we must do with our time, but one thing He’s talking about is spending time with the Lord and growing in union with Him. This union is the fruit of prayer and service, inspired by God’s grace, and we are invited into it because He thirsts and longs for us. It’s a long journey—but one worth taking.

Saints tell us when we reach this state of union, it’s an ongoing, almost continuous experience of God’s presence in us. When we’re in a state of grace, God is always present in us, but we don’t always experience it. In this transforming union, the saints say we do almost all the time. It yields a very deep and thorough transformation of our hearts and character; we’re entirely filled with love and substantially confirmed in every virtue.

This depth of union with God also results in great apostolic fruitfulness; in whatever service we’re doing, we see an explosion of fruitfulness. It produces a greater, richer, and purer delight in all created things, because we no longer cling to them. With detachment, we love them in a newer, deeper way.

An Essential Way of Loving Others

Jesus said, “Love one another as I have loved you.” How did Jesus love us?

One way He loved his disciples was through intercessory prayer. Just before his crucifixion, Jesus said to Peter, “Satan has asked to sift you like wheat, but I have prayed for you” (Lk 22:31-32). He didn’t say: “But I’ve trained you, I’ve taught you. I set a good example for you.” He did these things, but He said, “I prayed for you.” So to love like Jesus loves, as He commanded us, we must pray for one another. Jesus lives forever “to make intercession for us” (Heb 7:25).

The Catechism states, “Since Abraham, intercession, asking on behalf on another, has been characteristic of a heart attuned to God’s mercy. In intercession, he who prays looks ‘not only to his own interest, but also to the interests of others,’ even to the point of praying for those who do him harm” (2635).

Prayer transforms us, along with our service to the Lord. Transforming union produces in us a greater love and concern for others; our transformation in love, coming through prayer and service, helps us love others more.

When we’re trying to establish personal prayer, we should establish a beachhead—which is a place during war where they take a bit of territory to use to fan out into more conquests of greater territories. Make a rock-solid commitment to spend at least ten minutes in personal prayer daily. That should expand if we are growing in our love of God and in our union with Him, or if we are used to more, but it’s a good beginning.

I’ll close with another quote from John Paul II’s At the Beginning the New Millennium:

“It would be wrong to think that ordinary Christians can be content with a shallow prayer that is unable to fill their whole life, especially in the face of many trials, to which today’s world subjects faith. They would be not only mediocre Christians, but Christians at risk” (34). So, let us pray.