A Church in Crisis: Where Do We Stand? 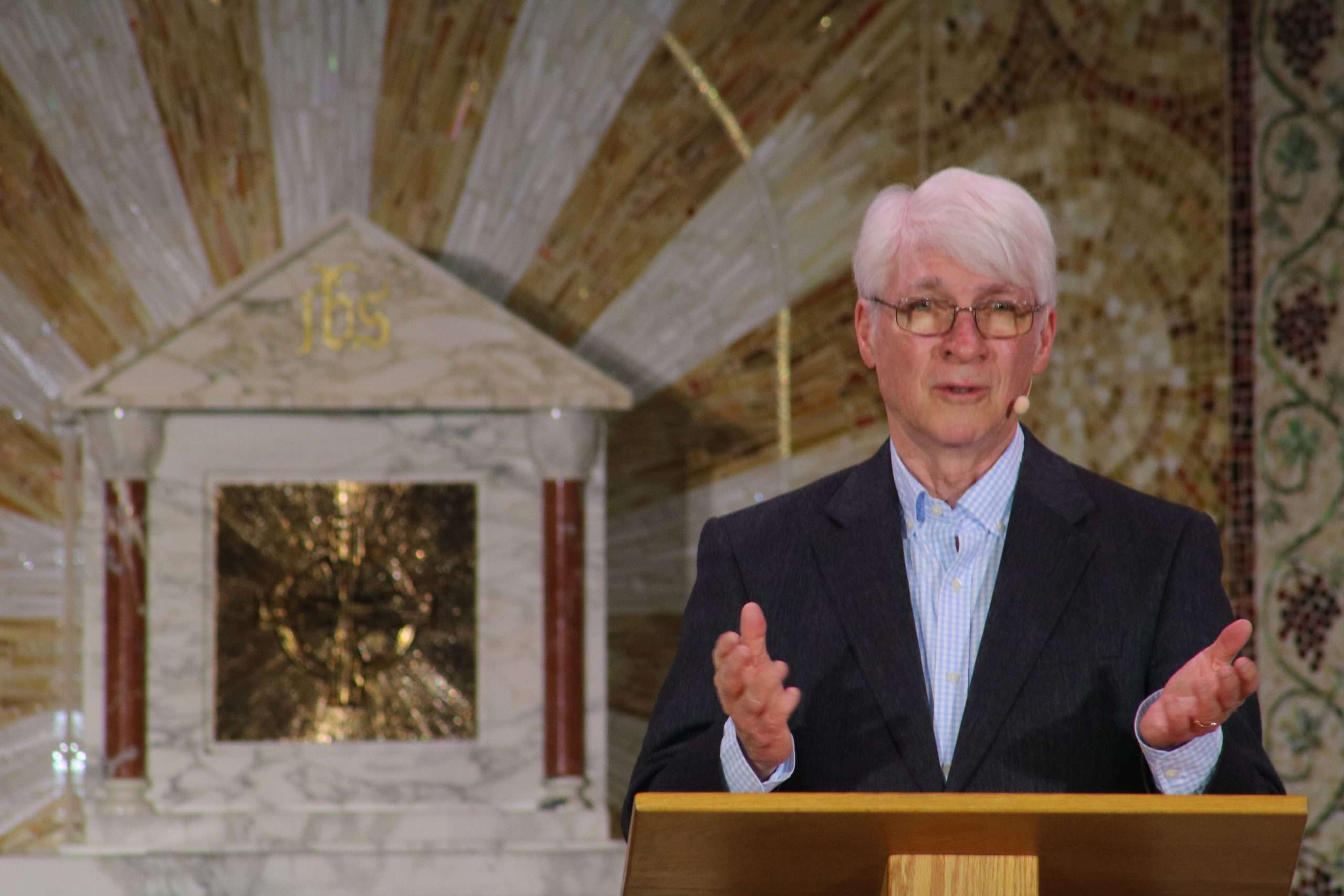 People are deeply troubled right now by what’s happening in the world and in the Church. There’s an unease under the surface. I’m getting more and more emails from people asking, “What’s going on?” I’m going to be as honest as I can in terms of what I see going on—and then I’m going to talk about the hope.

Dark clouds are gathering over the world and the Church. There’s more and more talk about how we need to have a global reset and a world authority that can handle these problems. More and more, in the US, Canada, and many countries around the world, all the levers of power are now in the hands of people radically opposed to the Christian way of life.

Challenges in the Church

Unfortunately, we’re also having challenging times in the Church. Just when the Church needs to speak a clear word with authority and power to the world, to call it back from its foolishness, the Church has been beaten into silence. We don’t have a clear word coming out. St. Paul said, “If there isn’t a clear sound given from the trumpet, who’s going to come for battle?” (1 Cor 14:8) Or as Jesus said, “A house divided against itself can’t stand” (Mk 3:25). We now are a house divided, unfortunately, in the Catholic Church. A number of years ago, John Paul II said, “We’re entering the final confrontation between the Gospel and the anti-Gospel, between Christ and the anti-Christ, between the Church and the anti-Church.” This isn’t just a battle that we’re finding in the world; this battle is going on in the Church. There’s a false Gospel and a fake Jesus in the Church. There’s a sickness there, and it’s spreading, and people are cheering it on. Shouldn’t there be some correction? Yes. Is there? No. Just when people need to hear a clear word, we get ambiguity and political correctness.

The bishops are trying to pretend that they are unified, but they are not. That’s a very serious problem that is confusing a lot of Catholics. What do you do? Who do you listen to? Who do you trust? We really need to know the real Jesus, who challenges us and calls us to repentance, conversion, and holiness.

Some good news is that Archbishop Aquila, from Denver, just came out with a statement saying that we’ve made a big mistake trying to accommodate the culture and affirm everyone and everything for so long. He said he is guilty of this too. He said it’s time to start talking about the consequences of not obeying the Lord and the reality of eternal punishment and condemnation. It’s time to start preaching the Gospel.

We also have whole bishops’ conferences fighting each other. Currently, the bishop in the Ukraine and Poland wrote a letter to their counterparts in Germany basically saying, “Please stop the direction you’re moving in, because it’s weakening our own people’s motivation to live a chaste life. They’re getting the impression from you that sexual sins are no big deal—please stop, because you’re weakening our people.” On one side of the German/Polish border, you have them interpreting Amoris Laetitia in a very liberal direction, and on another side, you have a bishops’ conference saying, “The only way we can interpret this, if there’s any ambiguity in the document, has to be in harmony with the Tradition”—which is an established principal in the Church.

We need to know what we’re facing. We need to know what’s coming against us. We need to know, because we’re going to run into it. It’s going to come down to the parish level, to the cities and villages. There is a global effort to take advantage of the Covid crisis to install a world authority run by the elite on totally secular principals. And they can’t brook the absolute claims of Jesus Christ. They’d like there to be dialogue and cooperation among religions, for everybody to be nice, and for nobody to say anything too radical or absolute, but Jesus is radical. He says, “I am the way, the truth and the life, and no one comes to the Father except through me” (Jn 14:6).  He said those who don’t believe Him will die in their sins.

Where is an acknowledgment of what the deepest human aspirations really are? We don’t just long for clean water, a reduced carbon footprint, or government handouts. We long for life! “What does it profit a person if he gains the whole world and he suffers the loss of his soul?” (Mk 8:36) Is there a solution to death? That’s the fundamental question. Where is the cry of the apostles? Where is the call of St. Peter on the day of Pentecost, saying, “Save yourselves from this wicked generation?” (Acts 2:40)

When are the shepherds going to wake up and start calling people out of the deception, the darkness, and the illusion of men being able to create a paradise on earth by themselves? We’ve tried that. Every time human beings try to create a paradise on earth, to solves the problems of the human race apart from God, they create hell on earth. Go back to the Tower of Babel. Go back to the Soviet Union or Nazi Germany.

Where is our hope? What we are facing is overwhelming, but Jesus is going to return in glory to judge the living and the dead. Psalm 2 says the one enthroned in heaven laughs at the folly and futility of rebellion against God. Exodus 15:6 says the hand of the Lord has struck with power. How did the hand of the Lord strike with power? Through the incarnation of Jesus Christ in the humility and hiddenness of Bethlehem, in the humility and the hiddenness of Mary’s womb. The hand of the Lord struck with power, and then it came into fullness in the manhood of Jesus, his crucifixion, and the resurrection.

We celebrate the resurrection, but what does it mean? It means that evil has truly been defeated. Satan has been crushed. The victory has been won. The Lord has come to our rescue; He’s done the deed that gets to the root desire of the human race—the desire to live and not die.

Now you might ask, if the victory has been won, why is the devil still prowling about like a lion, seeking to devour souls? Why are we still getting sick and dying? Why are we returning to dust? Because we have to accept our punishment. This is the punishment for the rebellion of our race against God. The Lord said, “If you do these things, you will surely die.” The devil said, “No you won’t. You’ll be like gods.”

What a disaster! We believe the devil, we try to separate ourselves from God, and we die. All the sickness, illness, pain, broken relationships, and death are because of rebellion against God. Life on earth will be hard. As Christians, we have to walk out the punishment, but its eternal implications have been taken away. When Christians die, it’s no longer separation from God, dying in our sins; there’s no condemnation. For Christians, death is a doorway into experiencing the fullness of the victory. But we have to walk the path. All of us have a path of pain in some way right now. All of us are dealing with things and are tempted by the devil. All of us have weaknesses of the flesh and are influenced in different ways by the world. We have to be encouraged by the fact that the victory really has been won. It’s been decided—the devil’s days are numbered. Like it says in Hebrews, “For the joy that was set before him, Jesus endured the cross.”

Jesus says we need to be worthy of Him. His disciples need to take up their cross every day and follow Him. We need to pass the test—that’s why we’re still on earth. It’s the test of deciding whether Jesus is worthy, our treasure, the Lord. Who wants salvation? Who will freely choose Him? Who will endure hardship rather than deny Him?

Our pride, blindness, selfishness, rebellion, and foolishness hold us back sometimes. But if your pride or foolishness is holding you back from a complete surrender to Jesus, you’re a fool. You’re choosing death rather than life. If you hear his voice today, harden not your hearts (Heb 3:15). None of us are worthy; none of us can make this journey on our own strength. Jesus is here to travel the journey with us—to make us worthy, by dwelling in our souls, by feeling us with his own body and blood, and by teaching us through his Word.

Listen to what Jesus says Matthew 10:37-38—this is in the context of persecution, and that’s going to become very relevant for us.

The world is closing in on us. Soon, they’re going to ask us to burn incense to the emperor. We have to prepare ourselves to not betray Christ when the test comes to us. These are serious words. We’ve got to want Jesus more than anything in our life, and we’ve got ask Him to give us the grace to persevere and to face the trial. And He will give us that grace.

Ralph Martin is president of Renewal Ministries. He also hosts The Choices We Face, a widely viewed weekly Catholic television and radio program distributed throughout the world. Ralph holds a doctorate in theology from the Pontifical University of St. Thomas (Angelicum) in Rome and is a professor and the director of Graduate Theology Programs in the New Evangelization at Sacred Heart Major Seminary in the Archdiocese of Detroit. He was named by Pope Benedict XVI as a Consultor to the Pontifical Council for the New Evangelization and was also appointed as a “peritus” to the Synod on the New Evangelization. Ralph is the author of a number of books, the most recent of which are A Church in Crisis: Pathways Forward, The Fulfillment of All Desire, The Urgency of the New Evangelization, and Will Many Be Saved? He and his wife Anne have six children and nineteen grandchildren and reside in Ann Arbor, Michigan.