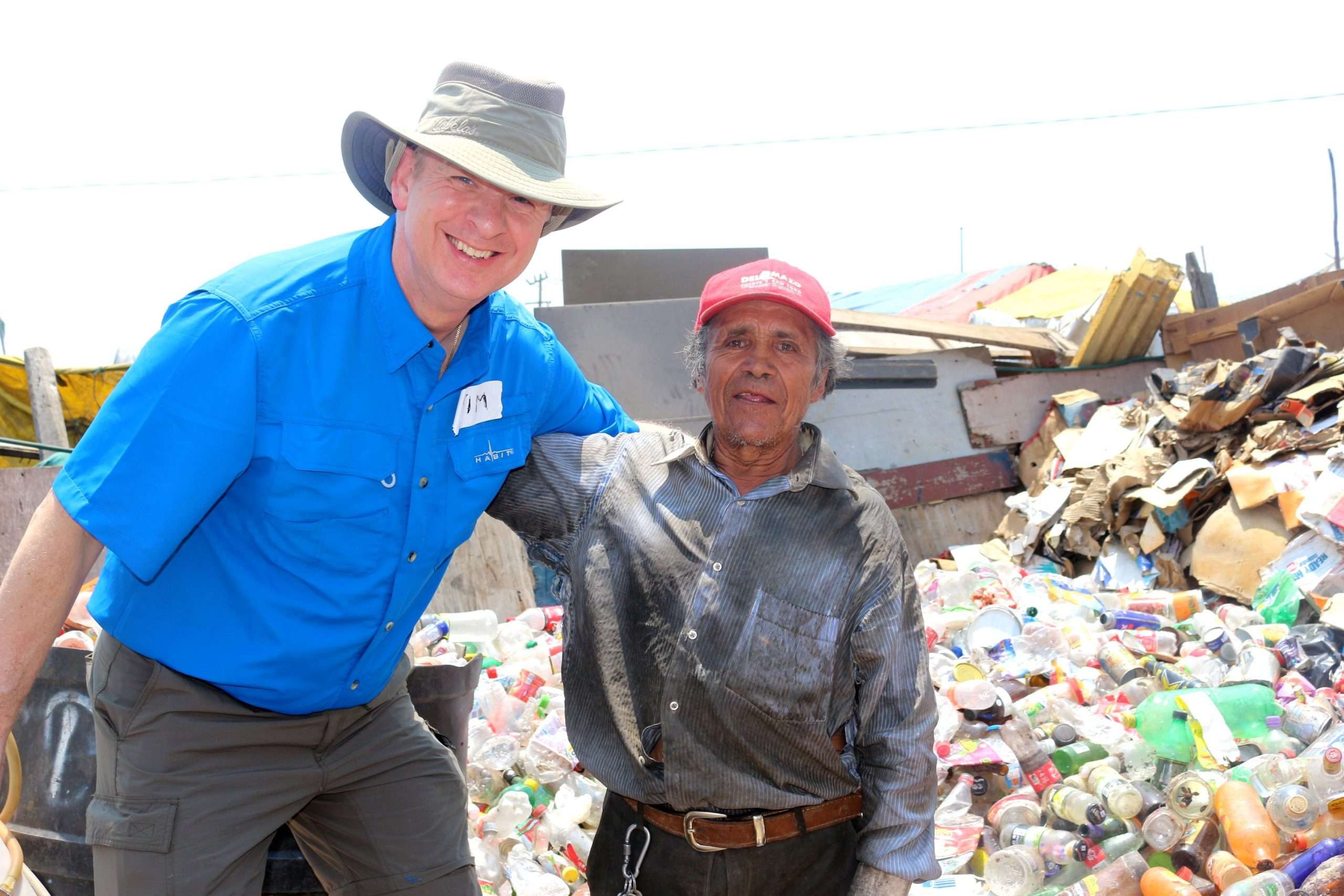 Tim Green, an integral member of Renewal Ministries’ Mexico mission team since 2013, passed away on March 28, 2021. Below is an article from our July 2018 newsletter that featured Tim and his work in Mexico. Tim’s obituary can be viewed here.

Eternal rest grant unto him, O Lord, and let perpetual light shine upon him. May the souls of all the faithful departed, through the mercy of God, rest in peace.

Extended family: That is how Renewal Ministries’ country coordinators and frequent mission team members describe the people they have come to know—and love—in the dumps of Mexico City. Renewal Ministries’ mission work there occurs more frequently than it does in any other specific place. Country Coordinator Butch Murphy travels there at least four times each year, along with a medical team—another unique aspect of our service in Mexico.

Renewal Ministries’ annual mission trips to Mexico take place in January with i.d.9:16 young adults; in April with seniors from Father Gabriel Richard High School (FGR) in Ann Arbor, Michigan; and in July and either October or November with other groups or individuals who want to serve there. Some years, our country coordinators also make additional trips to Mexico with groups that do all of their all of own fundraising.

Tim Green, who has served in Mexico regularly since he first traveled there in 2013 with his daughter’s FGR class, described his time there as “an incredible blessing.” Tim served in Mexico a second time in 2015 when his second daughter went with FGR, and then Country Coordinator Butch Murphy asked if he would consider serving more frequently, since he added so much to the team. Tim has traveled to Mexico City with Renewal Ministries six times since then.

Tim’s unique upbringing makes him particularly well suited to serving in Mexico City. He spent twelve years of his childhood there, and another year in Venezuela, while his father worked as a journalist, and then a bureau chief, for the Associated Press. In fact, Tim even speaks Spanish with a Mexico City accent. Among other things, this enables him to translate homilies; serve as a translator in the medical tent; and pray with people for healing, for freedom from oppression, and that they will experience God’s love.

Regarding his service with the young people from FGR and i.d.9:16, Tim said, “It’s a real pleasure to watch the kids encounter the Lord’s love in a deeper way, through mission activity and our prayer times together. Mother Teresa said you will encounter Christ in the poor, and that is so true. If I’m attentive to the Lord in ministry, I really encounter Him there.”

Tim described two times in which he very much encountered the Lord through the poor in Mexico: Once, while at a home for elderly men, he was ministering to a man who couldn’t use his arms and couldn’t speak. “I was giving him a banana, and he sort of smelled, and I don’t like being around people like that on a natural, human level,” said Tim. “Suddenly he cried, ‘Agua! Agua!’ (Water! Water!) He was thirsty—and it was like I heard the Lord say, ‘I thirst!’ from the cross.”

Another time, Tim was putting shoes on an elderly woman who couldn’t reach her feet. He gave her a kiss on the cheek, which is a sign of great respect. In doing so, he realized she smelled very badly—and the Lord said to him, “That’s Me you just smelled.”

Tim explained, “I have a fairly small heart with not a lot of generosity and love—and the Lord keeps expanding it every time we go down there, which is very, very good.”

The Mexicans who live in the dump “have an incredible generosity of spirit,” said Tim. He explained that the mission team often will give people two sandwiches, because “they will find someone and give one away. If you give them one sandwich, they will give half of it away.”

“Every group is amazed by the total giving they have for each other,” he added. “They try to look out for those in need who don’t have enough. For instance, there is a man who is ninety-two with deteriorated eyesight. He is treated with respect and dignity. He is taken through the food line, and people make sure he has what he needs.”

They extend that generosity and love to the young people who attend missions. “Our kids (the FGR students, all of whom have taken at least three years of Spanish) stumble through their conversations, and the residents smile and nod and talk back,” said Tim. “They share the love they have for each other.”

“The work Butch and Debbie Herbeck do—the love they show the people—is what carries the day,” said Tim. “It’s delightful to watch. You go there and you experience the love of your extended family and that love gets shared with our kids (who go on the missions). “

While members of Renewal Ministries’ mission teams benefit from serving in Mexico, the residents in the dump also appreciate the presence, service, and love of the people on mission. For instance, “they are incredibly grateful for our priests bringing the sacraments for them,” said Tim. “I don’t think that happens very often—that a priest is there who they can talk to and who can bless them. They are so grateful.”

Another way the residents have shown their gratitude for their “extended family” is that they recently put a lot of effort into updating the medical tent area, giving it two wooden walls, a tin roof, and a cement floor. As one member of the i.d.9:16 medical mission team, Hailey Rainey, said, “The leader of the community told us that the people wanted to build a beautiful place for us to come to in order to demonstrate their gratitude and love.”

There are limits to what can be done in the medical tent, but the team is able to “clean wounds and give medicines to people who need them on a regular basis for diabetes, etc. In some cases, we are their sole source for that medicine,” said Tim. People also can be treated for things they typical encounter, like getting jabbed in the hand or foot by a needle while going through the dump, foot problems, or parasites. Tim added, “The doctors serve selflessly in the tent. It gets hot, but they serve for hours on end.”

Tim himself was diagnosed with an inoperable brain tumor eighteen years ago. He has done radiation twice, and after exhausting all other options, recently underwent chemotherapy. He said “it is by God’s grace” that he is able to continue serving in Mexico. Even his brother, an atheist and a doctor, admits it is a “miracle” that Tim has still been well enough to go.

“I thought my first trip might be my last,” Tim explained. “Every time I go, I wonder if it will be my last trip. It helps me to live for the moment and to be more present to the people I am there with.”

“This mission is so transformational,” he concluded. “It impacts the people who go on it so deeply. It’s worth anyone considering going on it. If they want to encounter the Lord and His people, it definitely happens on this trip.”

Heather Schultz is Renewal Ministries' editor. She graduated with a BA in English from Hillsdale College. She is married to Doug and has five children.